Sometimes I get really nervous from the pressure of giving gifts that I'd much rather call off the whole process or just give some moneys. Since it's normally unacceptable to call it all off, I try to come up with inside joke gifts or clever ways to give cash. For a birthday last week, I got clever.

They asked for something I totally couldn't afford [Ray Bans], so I helped pitch into that fund, and kept with a summertime theme. I got a cooler with their team on it, bathing suit, and ice cubes... filled with cash. 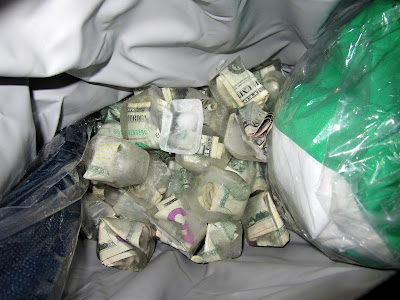 It was VERY simple. If you wanna do it too, here's how:

1. Boil a bucket of water. This makes it so the ice cubes are super clear once they're frozen. 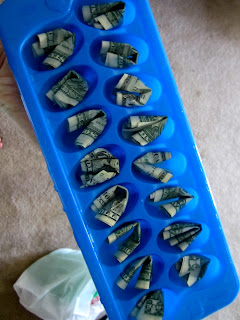 2. Fold up the cash and place in cubes. I originally thought the tighter rolled, the better... but that was false. If you make them a little messier, they'll stay in better once the water is poured in.

3. Pour the boiled water into the ice tray. [I put it in a cup first and let it cool a little bit.] Some of the cash will float up and out of the holes, so just use your fingers to sink them again.

5. Remove from trays once completely frozen and dump into your container. Some of the cash was poking out of the cubes, but it's a neat effect. 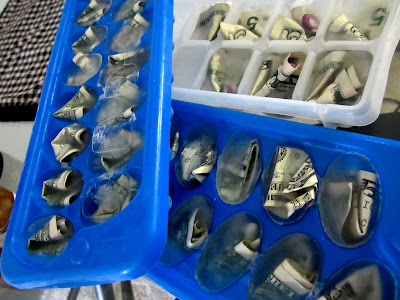 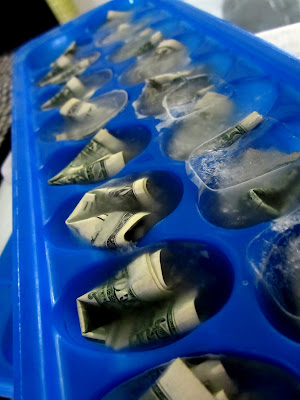 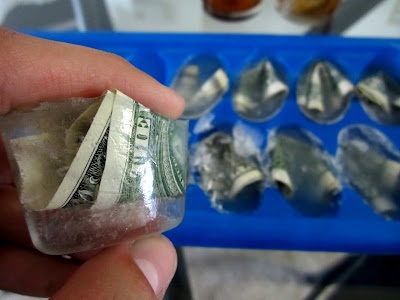 The fun part is seeing their face and realizing they have to let it melt AND dry before they can use it... Then they have a big ol fat, wrinkled stack of ones. [If you're broke like me and can't afford the big bucks, anyway.]

I'm sure this has been done before, but I'll be honest... I came up with this idea on my own and I'm pretty damn proud of it.