watch etv: i worked the sonic drive thru to play pranks

When I say I wanna do something, I normally do everything in my power to make sure I do it. It's taken me over a year to be able to do this, and it was everything I hoped it would be.

I finally convinced Sonic to let me work their drive through for an hour or so, and say whatever my little heart desired to the people coming through. They were not forewarned, they had no idea what was going on, and I had no idea what I'd say.

I set up a camera that was mostly hidden at the drive-thru ordering station, and had Alli film me inside. I also had Niblett call from the station, where he could see/hear nothing but what I was saying, and tell me random things to relay to the customers.

You'd think they'd be like HELL NO you're never coming back, but the bosses at Sonic LOVED it and said I could come back any time! They even gave me an award! WHATTT. 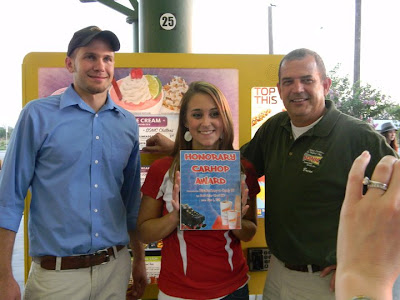 So much fun... seriously. When I first edited this video, it was almost 20 minutes long... Obviously I cut it down.

Would you judge me if I said I'M SO COOL for doing this?! Cuz I feel like I am... just sayin.

That's pretty funny.....the last line you said that Nibbett would have said had me going pretty loud. With the singing, did anyone sing back to you?

Omg, we're rolling!!
Btw, being a carhop was my favorite job when I was 16. I never got an award! :P