I've been to plenty music festivals before, but Coachella is different than most of them. I'm typically worried about how much I drink and how silly I get... but at Coachella, it's about how you look and who you're with.

Before I share all of the things that I saw, let's get to the important stuff, shall we?!

DAY ONE:
I ordered these pieces while drunkenly going through ASOS clearance one night... knowing they were "Coachella-y" but having no idea what I'd do with them. The night I was packing I accidentally threw them on together and was real into it. 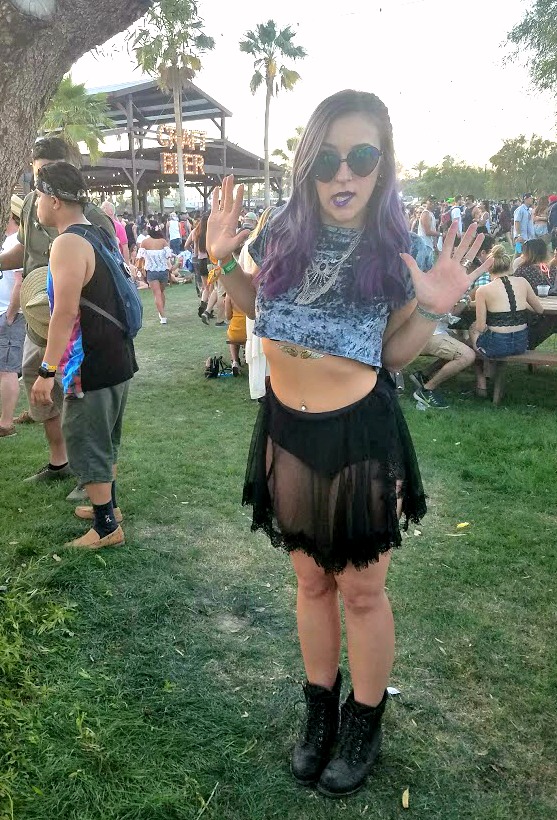 For my make-up, I wanted to go real metallic-y. I found the eyeshadow with the most glitter and did a silver/blue smokey eye, with silver and black liquid eyeliner, and blue shadow on the bottom lash. I saw on Pinterest that "everyone at Coachella would have the lip line" and thought it was ridiculous, but ended up loving it. That's the same eyeliner that is on my eyes. 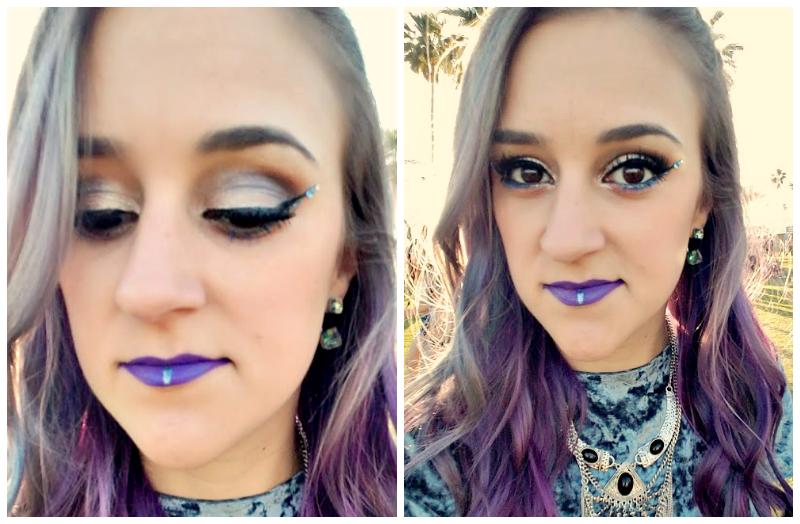 DAY TWO:
This was my "basic Coachella" outfit, but I loved it. It's a little bit sexy, a little bit grunge, and another excuse to not wear a bra. 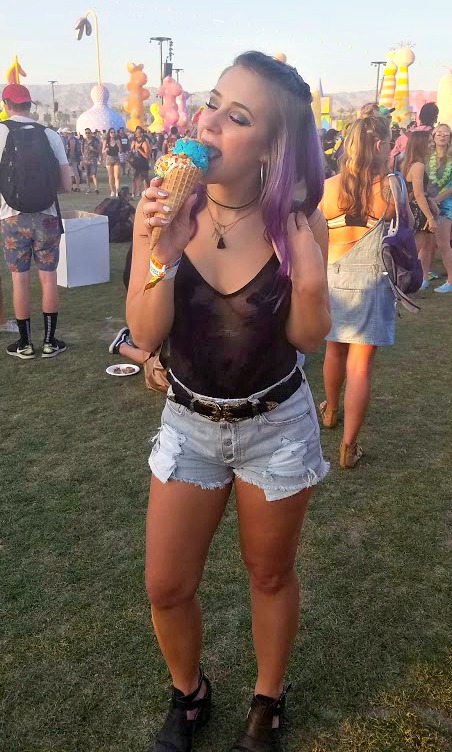 -bodysuit: ASOS
-jorts: Express [I had to order two sizes up from my usual jean size]
-belt: Boohoo
-booties: I forget. Probably JustFab or Target
-necklaces: F21 and Amazon

My make-up was a lot darker than Friday because in my mind it made sense for Saturday to be for the sultry. Also, rhinestones were a must each night. I thought I would like putting more on... over my eyebrows, in a design, who knows... but ended up keeping them simple. 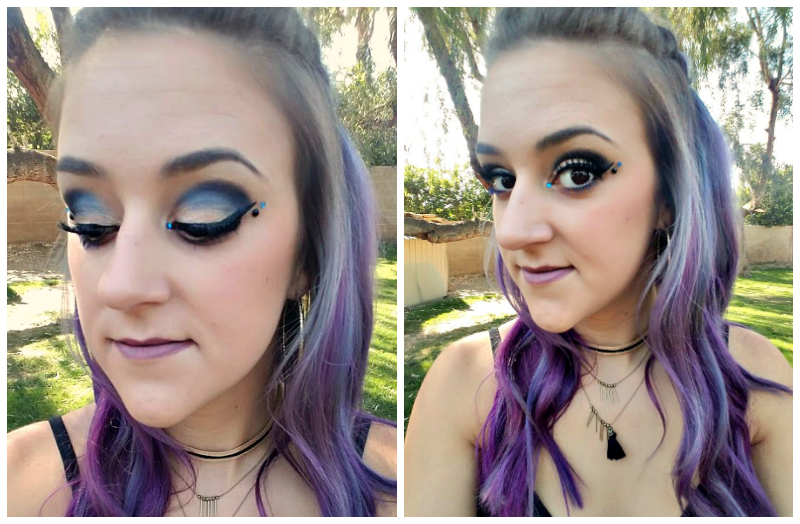 DAY THREE
I planned all of my outfits ahead of time, but brought a few extras just in case. This top was an extra, but I liked it with the bandana, which I learned by day two that unless you want painful lungs the next morning, you should have a bandana handy. 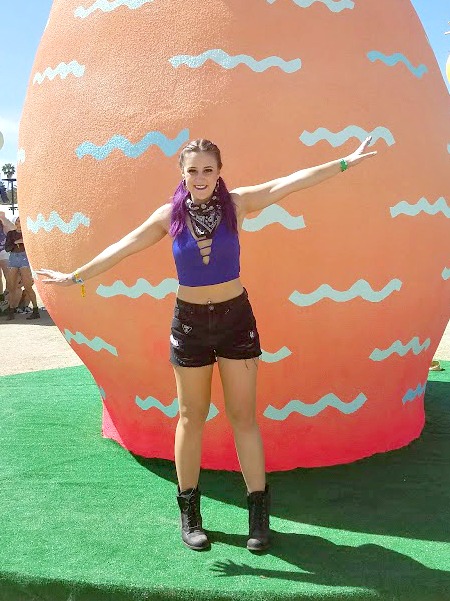 No matter what, I wanted a LOT of color for Sunday. We'd only be there during the day, it was Easter... color was needed. I used my Alice in Wonderland Urban Decay palette for a teal and purple eyeball, and eventually did a semi-ombre lip with two different Liquid Suedes from NYX. 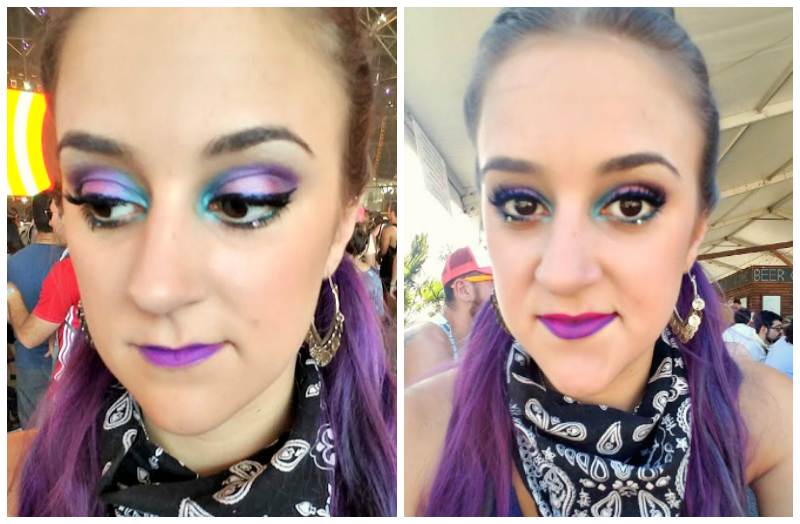 A lot of people ask me how I do my eye make-up, and honestly, it's ALWAYS the same formula... normally 3-4 colors... I put a dark one above the crease, a bright one inside the corners of my eyes, a medium shade on the outside corners, and then one final color to blend it all. No real science to it... and most of the time I use my fingers until the blending color.

After MONTHS of looking for ideas on Pinterest and shopping and ordering and returning, I'm pretty proud to say I only copied one outfit, and I probably only spent about... $150ish on everything. I also gained a new love of bandanas.... it's gonna become a regular thing for me, I think.

I love your Coachella outfit! You look fabulous in that velvet crop-top, lace tie skirt and shapers undies! I wish there were more photos of you in that outfit to look at - love!!! The Asos bodysuit looks pretty as well. Love your eyeshadow, eyeliners and mascara - beautiful!

You looks so pretty!! and your beauty review is really awesome. Thanks to share this beautiful review. It's really helpful for eye makeups. I believe makeup is an important part of women's life. I can't imagine a single day without my makeups. I love to use my favorite Liquid Matte Lipsticks for my lip.