This past weekend was the first time I've had multiple days off in a row without anything to do, and I panicked. Everyone told me to just relax and enjoy not having any plans, but after 2015, that's not something I believe in.

My 2015 resolution was to travel once a month. I knew it'd be tough, that my bank account would suffer a bit, but knew it was the perfect year to do it. Fresh off a break-up, and having far too many never-have-I-evers when it comes to traveling, it was the perfect mission. I can't believe I genuinely completed it.

Turns out, I can be somewhat focused when I wanna be. In January, I went through my calendar and each month put options for ideal places. I had specific events for some, others coulda been anywhere, but that quick task helped BIG TIME with the planning and making sure I got to most of the places I really wanted to. I also marked down when I should start looking for flights around 6 weeks before I wanted to go. Considering I only get one weekend off a month, I had to have an idea which ones they would be. Plus, ADD is tough.

Why pay for school when you can learn these things while spending money on traveling?

Now, as for my adventures... 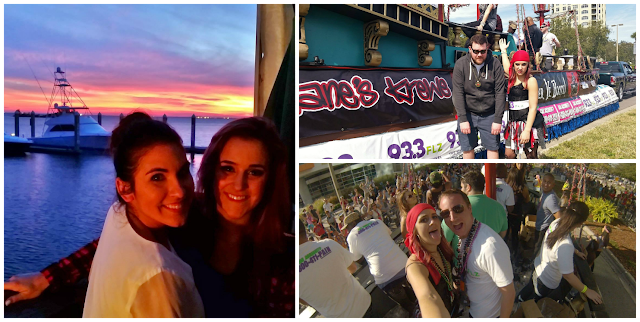 For years I've been hearing/seeing how awesome this Mardi Gras-like day is. The Kane Show [morning show at my home station] has a huge float and my soon to be new boss was still down there. It was everything I'd hoped! I rode on top of the float with Kane, had a beautiful dinner at sunset, and caught the Super Bowl at Rose's friend's house, with an outdoor projector and ALL the food.
What I learned: Lots of cities have major events that you may not know of. Ask your friends that live elsewhere what they look forward to every year and visit them for that. It may be a little selfish, but you're still visiting THEM! [And you'll get a free stay and have a pro who knows the ropes, duh] 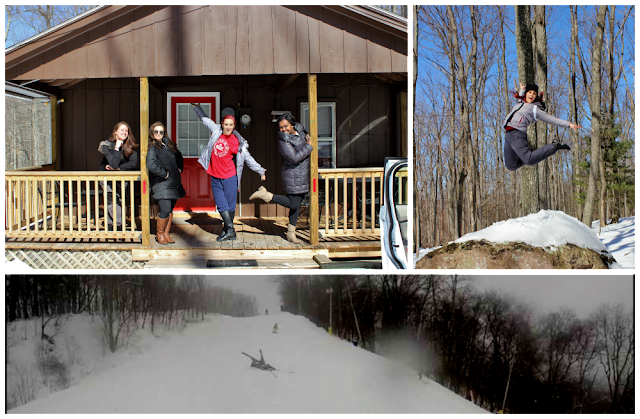 It had been about a decade since I last ski'd, so I knew it was on my bucket list for the year. I found this cute little cabin that slept 8 people on Airbnb and had a girls party night on Friday, hiking day/party night with other friends Saturday, then went skiing on Sunday. It snowed for some of the weekend which made it even cooler, and it's only a little over an hour away so most people only came up for one night. I felt like I had so many different experiences in one tiny little cabin weekend! As for the skiing, you can see in the bottom picture how that went. That was me the whole way down my first black diamond.
What I learned: My body is too old for skiing these days. It was so painful in my knees to be even a little enjoyable. Also, there is no better pizza than crab pizza from Ventura's. 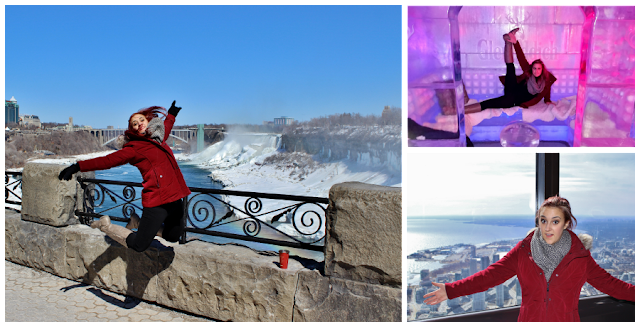 I knew I had to get out of the country at some point in 2015. I hoped it would be a cruise or something, but I had also never been to Canada. I flew to Rochester [had to see my beloved Nugget] and road tripped the rest of the way with Corey. It was cold, but absolutely beautiful. With a quick Internet search, we found an awesome Ice Bar that was EMPTY when we went, so we got to talk to the owner for a while, which may have been one of my favorite parts.
What I learned: Seeing the Falls when they're frozen is a must. I've never seen them not frozen, but it was crazy awesome. Plus, Canadians are really as friendly as you hear. 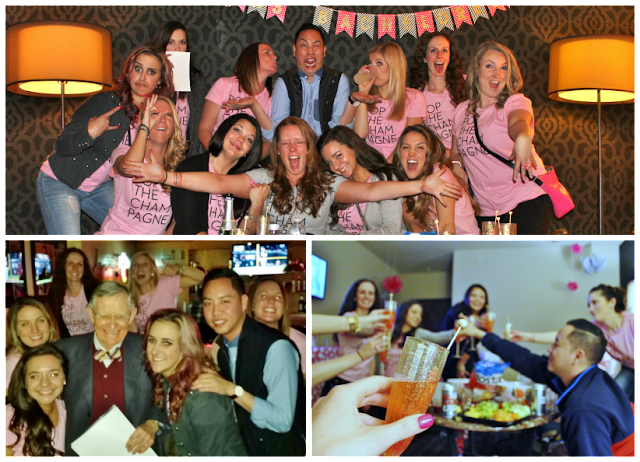 Maybe some will think this was cheating, but it was a weekend away for my former roommate's bachelorette party, and we did Morgantown unlike I ever have before: in a hotel. We also got a fancy dinner.... and, well, everything else was just as it should be in Motown: Full of shots, beer bongs, and dirty feet.
What I learned: No matter how long you live in a place, there are always places you haven't been and can explore. Plus, the world is always changing and it's never going to be exactly as you remember. 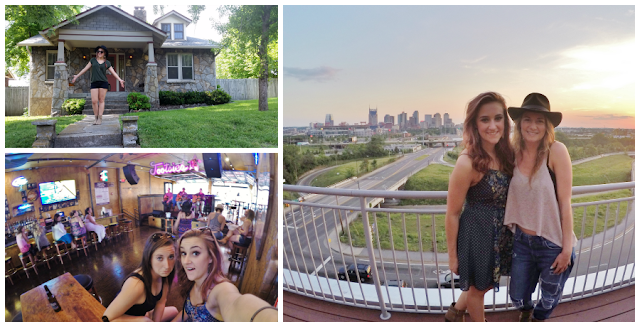 I'd been promising my friend for years that I'd visit him in the city I knew I'd love, and finally booked a flight two weeks before I went [which was the very next weekend after Morgantown]. It was perfect, as I've shared in my previous post. We spent a day as tourists, and the rest living like a singer/songwriter- bumping into Chris Young, drinking on rooftops, and listening as they came up lyrics on the spot.
What I learned: Don't always be a tourist. Don't feel like you need to hit all the tourist hot spots in order to "complete your trip." If you wanna get a real feel for a city- do as locals do. My most important lesson this trip: It is 100% possible to fall madly in love with a city, and to feel real heartbreak when you leave.

When I first heard about this country music festival, I thought there was no chance I'd be able to afford tickets. Turned out- they weren't that bad! And when you camp out, it turns into one hell of an experience. We only got to go for two nights, but even in the torrential downpours, I immediately knew I'd have to go back this year for the whole time. Country music all day, thousands of people who wanna have a good time, making new friends, and sleepovers- it's kinda my Heaven.
What I learned: I need to go to more music festivals. When it comes to festivals- bring wipes. Showers are not an option. 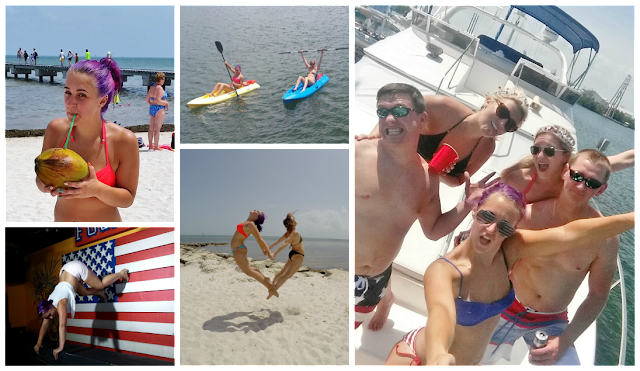 We stayed on a freaking house boat! And it was WAYYY less than a hotel for five people. We had kayaks attached to it, and less than a mile walk to downtown Key West. Turns out, 4th of July is "off season" for them, so it was relatively tame. A bartender told us all about the SEVERAL other events they have throughout the year and I think we'll have to go back to the boat for one of those.
What I learned: Airbnb is the freaking bomb, and they have a section [or several] for unusual housing. House boats > hotels. 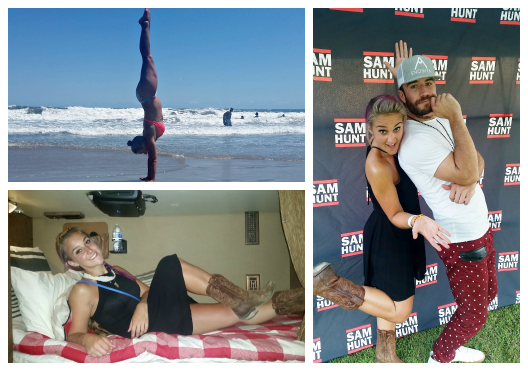 When I missed Sam Hunt in DC because of a wedding, I immediately planned on catching him in my former home, and my God if that picture isn't worth it, I don't know what is! Also got to see inside Lady A's bus, and do flips on the beach, of course.
What I learned: With enough motivation and hustle, you can hit every bar along the boardwalk in a few hours. 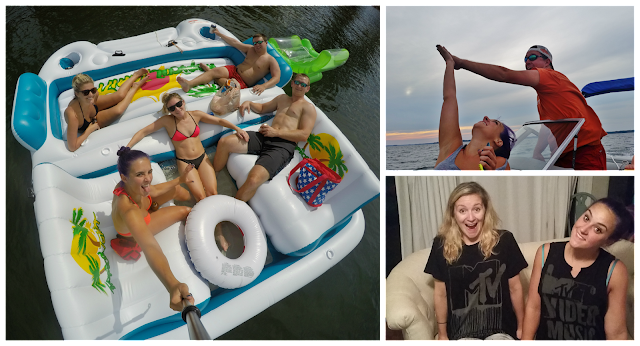 When I realized I had LESS THAN A WEEK to plan my monthly trip, I stalked Hipmunk for all the cities my friends live in, and my BFF's home was under $150 round trip. Since I had just been to Florida with them, I knew I could be 5th wheel again and have a great time on their boat. I suffered through a migraine on day two which sucked, but I rallied to party through the VMA's.
What I learned: If you have nothing to do on a nice weekend, check flights. What's it gonna hurt? Just pack a bag and go. Especially if it's NOT a nice forecast where you live, but is elsewhere. 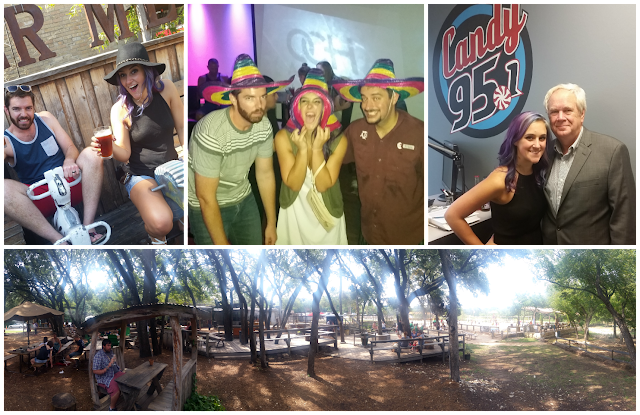 Okay, so this was actually the end of September, but it was the only weekend I had to make it down there so it counts! I had to do my annual trip to visit my people, but really wanted to explore Austin more, since I didn't get to do much of that when I lived down there. The city is so much like Nashville, and has SO MUCH CULTURE. Every bar had a theme. My favorite is pictured a the bottom... it had sand volleyball courts, cornhole, washers, and plenty of TVs. Moontower Saloon- A perfect Sunday Funday spot.
What I learned: Always make an impression so people don't forget you. I was amazed at how many people at the random bars, in my old office, etc that not only remembered who I was, but boosted my ego with how much they missed me AND made time to meet me for a big dinner. It's been 4.5 years since I left Texas.... they could have forgotten all about me and I'd understand it. 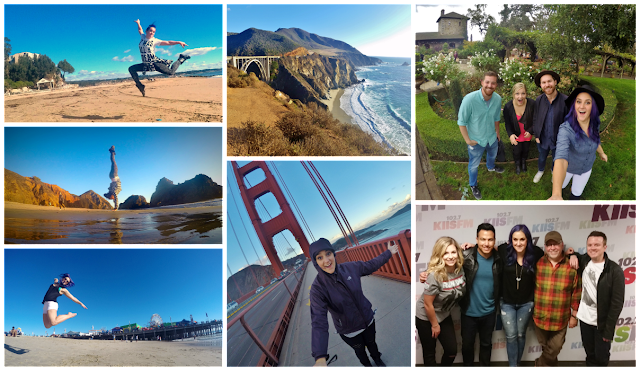 By far the most important trip of my year. I'm so upset I never got around to making one big post about it, but I did post an album if you want to go through it. After some dramatic happenings, I just needed to get away and be independent. I traveled from Sacramento to San Diego by myself [with the exception of staying with people in some cities]. I drove the PCH in a sports car, drank wine in Napa Valley, walked across the Bay Bridge in San Fran, met with legendary radio people in LA, saw a taping of Jimmy Kimmel, stayed at the coolest hotel EVER- The Madonna Inn, and took selfies with seals in San Diego. I truly took advantage of every minute I had out there, and found myself again. I didn't even know I hadn't been myself until I went, but the feeling I had when I got back was one I'll never forget.
What I learned: Traveling alone while you're young is absolutely necessary. Not just visiting someone alone, but getting a hotel for yourself, eating dinner alone and trying to make friends before going out that night, hiking trails and setting up selfie sticks without any care of what people think... that's how you become comfortable with who you are in a very special way.

It only made sense to finish the year traveling, and after years of avoiding gambling, I decided to stop being a little bitch about it. I've always been afraid of getting addicted to gambling, but that definitely didn't happen because I'm also hella stingy with my money. When your best girl Ellen takes all your money on her slot machine, you realize nothing is going to help you out. For the big night, we found a party on Playground Pier with open bar, SO many bars with different themes, and the opportunity to break another World Record- most people popping bottles at the same time. We did it!
What I learned: Gambling sucks unless you know how to play one of the card games without pissing other players off. Also, make friends with someone who does know that so you can watch and drink for free while they throw all their money away.


That was way too many words. This is supposed to be a picture book type of blog.... but, I'm gonna be honest- I inspired myself this year, and I'm just hoping I can help even ONE person decide that things don't have to be as difficult or impossible as you may think they are. Say yes. Get off the couch. Do what you daydream about doing. YOLO.

Thank you for sharing. I hope in 2016 to take more day trips and reading this blog makes me want to make it happen :)