Tweet Travie McCoy came to College Station last Wednesday and is the sole reason I died I got to interview him before he went on stage!

I got to the bar around 7 and talked to him for a quick second during sound check, but it wasn't until he came back after 1am that I got to talk to him on camera.

We were right below the stage, the bass was booming, and it had been a long night for both of us, to say the least.

Still- I managed to get a couple answers out of him. The problem is that I had to caption everything and make it choppy. But choppy= short, and ADD people love short videos.

He was quick, and didn't talk much, but it might have been because of his state of mind. He did make fun of me a few times, though... And I'm going to assume it was in a friendly way.

I'm thinkin' about making a bloopers reel of this interview, but it probably wouldn't be a smart idea... and I have this picture, which is a screen shot from the bloopers, as a reminder to think before I do. 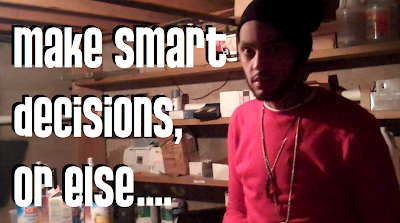 The show was quick, but good. I also got to meet DJ Benzi, who works with Mike Posner and Chitty Bang, to name a few. As far as I can tell, he seems like a pretty cool guy... that loves to promote himself.

Check out the station's pictures from the event! There are definitely some good ones.