on the racks: justin bieber does people

I don't talk about the cover of People Magazine very much, probably because it's weekly, but this next week coming up may annoy the piss out of 50% or more of the nation.

This will be the cover: 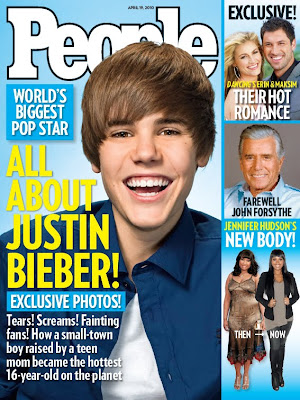 Ya know, I'll be honest- I kinda like the kid. That being said- This cover is really annoying.

Could his smile be any bigger? Could he look any more peachy?! And really?! World's biggest pop star?!

I can only imagine the little girls yelling at me right now... I'm sorry, girls. Like I said, I'm a fan... But this is too much. I will not be framing it and hanging it on my shrine to OMGOMGBIEBERBABYYYY!

Tell me, though- Have you caught the Bieber fever like me? [Minus this cover?!] It's okay to admit it. I won't tell anyone.

Anyway.. Apparently he talks all about his dating life, rise to stardom thanks to YouTube, and everything else that should have been in a magazine article a year ago. He also says he's staying grounded.

"I still feel regular," he says. "You know, sometimes it's weird that I go places and I have thousands of people waiting for me, but I always think, 'I'm Justin' "

It's a shame all my radio friends say just the opposite.... Just sayin'.

Cover your eyes for the next week if you're as creeped out as me... And brace yourself. This is going to be a wild Bieber ride for a couple years.