Sometimes the creators of things run too far with their great idea.

The Jersey Shore people are on their way to ruining the name, I feel.

First of all- Moving the show down south?! Stupid.

Second of all- They're doing another version of it... Or at least another show with the same idea, just a completely different stereotype.

This time they're focusing on Russian-Americans. 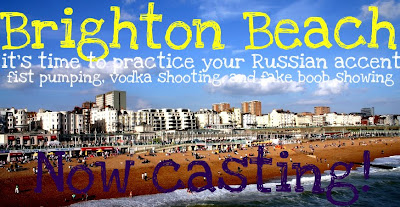 .... I didn't know Russian-Americans were prominent, nor do I really know of any stereotype that would be show worthy... But maybe I'm just sheltered and out of the loop.

The show is probably going to be filmed in Brighton Beach in NYC. This is what the casting call says:

“Are you the Russian Snooki or The Situation? Are you a super outgoing and fun-loving Russian-American that sometimes sneaks kalbaska, pel’meni and vodka from the fridge? Can people hear the Euro/Techno/Russian music blasting from your car before they see you pull up? … The cameras will roll as you do what you do best—eat, drink and PARTY. Here’s who we’re looking for: Outgoing guys and girls between the ages of 21 and 30 who would be willing to spend one summer living in an all-expense paid digs in the New York City area and consider themselves to be Russian-American (or from the former U.S.S.R, including the Caucasus)... You must love attention and be the opposite of camera-shy…..”

Ohh boy. Is it going to be the blonde version of fist pumping guidos?!

Apparently the producer doesn't want to accentuate stereotypes this time, though...

“While some of the stereotypes may have merit, I’m trying to show that [the community is] a lot more complex..."

Sounds like what RWDC was trying to do.... They failed at it, in case no one noticed. No one likes "complexity," even though they say they do.

This show is probably going to be an epic fail. Just sayin'.

PS: I want everyone to apply, and if you do make it on the show, you know who to call when you find out! ;)
Posted by elizabethany at 12:50 PM

Ah, I totally agree. EPIC FAIL. I had no idea there were stereotypes for Russian-Americans???? Is this an MTV show? Come on MTV....where is the music?