the premiere of the real world: dc 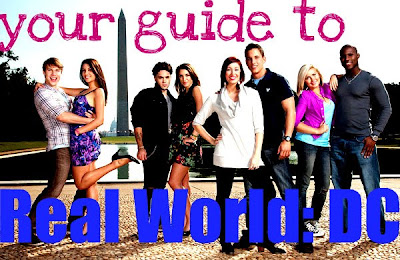 Holy moly, the day has come and gone... Can you believe it?! Not I, that's for sure.

In case you've been hiding in a cave or boycotting me for the past couple months, the day was December 30th- The premiere of MTV's The Real World: DC. [Again, if you've just come back to life, you should catch up. Pronto.]

My friend and fellow RWDC guru Chris and I organized and co-hosted THE premiere event along with Metromix DC. [I guess it's technically not "official" since MTV didn't sponsor it... But it was certainly the one to be at!]

Before we move on and talk details, it may be easier to see it via video. I think this calls for the finale of eTV's Finding the Real World DC Cast. [You didn't really think I'd end with a failure, did you?!] It's in two parts because there was just so much goodness, so make sure to watch them both! You'll see just how it all went down!

Honestly, I keep wanting to just say the night was absolutely unreal, but I guess that wouldn't be correct. It was very "Real." It was also amazing, incredible, fun... The list goes on.

Watching the first episode with the cast was great. It was exciting to see their faces and reactions [even though they've seen it before], and even ask on the spot questions about it all. [For example, "Emily, did you really believe everything Andrew was saying?!" The answer: Yes. Why wouldn't I?!]

I also loved watching it with so many DC fans. That may have been one of my favorite parts, actually. Hearing y'all scream with excitement, laugh, yell at Ty for the religion fight... It was refreshing to see [for both myself and the cast, I think] that DC did appreciate them being here, and will absolutely make this a top rated show. YAY!

I think the eTV finale really shows all that needs to be shown when it comes to the events. Now I just want to take the time to say thank you, SO much, to everyone who came out. Chris and I knew this could be an incredible event for everyone to remember, but just like any party, you can't ever predict the outcome. We appreciate each and every one of you for following us through this journey and being there for the end of one chapter, and the beginning of another when it comes to RWDC.

Also, of course, I need to thank Ashley, Callie, Emily, Mike and Ty. Having you guys there made the night and I can't thank you enough for coming out! It was great to finally hang out, sans cameras, and get to know each other! Every one of you is great, hilarious, crazy, and interesting... And incredibly patient for dealing with my annoying ass all summer. So again, thank you for everything, friends! ;)

One final thank you: To all the media/news/photography people who came out! You obviously had a huge part in the success as well! [And though I'm a little upset Patrick from Metblogs was in my seat during the tequila shot, I'm glad he came!]

Now, if you'd like to see even more, here are some pictures that I took throughout the night:

And these fantabulous pictures are thanks to Metromix and Alfredo Flores:

Like I've said before, this isn't the end the elizabethany-RWDC connection. I will be posting podcasts once a week called "The Real World DC, As We Saw It" right here on love, elizabethany. We'll [myself along with Chris and other various people involved, including the roommates] be taking a look at the episodes and talking more about what really happened here in DC.

Again, thanks to everyone involved with the premiere! It was a major SUCCESS!
*HIGH FIVE, CHRIS!*

PS: If you want to watch the entire first episode, you're welcome. [Thanks MTV ;)]

Posted by elizabethany at 8:23 AM

You snooze you lose, that's what you get when you ask me to save your seat while you go pee! :-)

I'm sure you had many more shots with the cast at Halo.