MTV's "Jersey Shore" may be some people's new favorite show, but it's causing some serious repercussions! 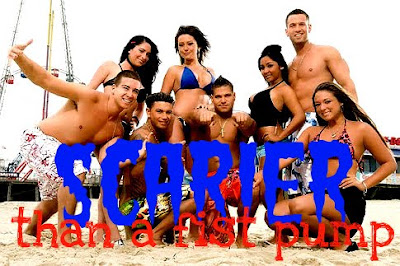 The show is absolutely ridiculous... Everyone knows it. [Although, my I'm-so-awesome-I-can-backstab-friends ex-friend of mine thinks these people are actually attractive... WHAT?!] I think the only other people genuinely liking the stereotypes portrayed are the people who fit right in, and are proud of it.

The other people, who may or may not fit in but are stereotyped the same way, are furious.

"MTV is providing a one-dimensional, dramatized version of a very small group of visitors’ summer experiences in one Jersey Shore town. We're flattered that MTV thinks we're an interesting enough destination to warrant an entire reality series, but the national TV audience is hardly getting the full story."
- Daniel Cappello, Executive Director of the Jersey Shore Convention and Visitors Bureau

"Their behavior is reprehensible and demeaning in all respects. I don't see any redeeming value in the show. They are an embarrassment to themselves and to their families."
André DiMino, President of Unico National

They've gone as far as to submit death threats to MTV and its staff, stand outside of the Times Square studios to threaten the company, and even pull advertising [Dominos].

MTV doesn't seem to be too worried about it, though. They're going along with the show, probably getting tons of people wanting that advertising space because of the outrageous ratings, and standing by their concept.

"We understand that this show is not intended for every audience and depicts just one aspect of youth culture. Our intention was never to stereotype, discriminate or offend."

I'll be the first to admit, the show is absolutely an embarrassment to Italians and people of Jersey, but so what?! Even my hickey-contest-havin' BFF is a proud Italian [that doesn't fit this stereotype] and admits it's a hilarious show.

So, all of you freaking out about the show, calm your life. It's comedy. These people are ruining their lives and images, not you.