two of my fave things in one: redskins and monkeys

Oh this makes me so excited!

I wanted to do a Redskins/football post, and I found the perfect thing to share with you. Why is it perfect? Because it combines two of my most favorite things into one post.

One of our players recently got a pet MONKEY! On first thought you may assume Chris Cooley or Clinton Portis may get such a pet, but you're wrong! 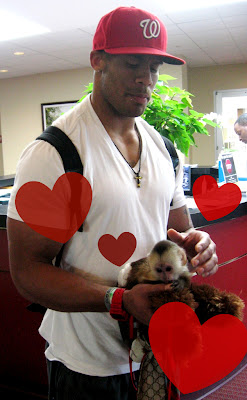 LaRon Landry, the safety who used to run the show with Sean Taylor [RIP] and now rocks people on his own, apparently has a soft spot.

He got this white-faced capuchin to be his companion, until death do they part. His reasoning:

Just a thought over the offseason. I didn't want nothin' too big. He'll get up to fifteen pounds, live 35 to 50 years. When I die, he can die with me.

First of all- I'm hella jealous. I want one right now. Second- Landry... Can we get married right now?

His teammates all think he's crazy, of course. They also thought he was joking for a while. Kareem Moore, Jason Campbell, and Carlos Rogers are just some of the players thinking it was all a joke. Our main man Cooley admitted it'd be cool for a week, but then not so much.

Landry apparently loves the little guy, though. His friends brought the monkey to him after practice and it went crazy "cheeping" for him. He also admitted that yes, he does have to change the diapers for at least a year.

I love it. I absolutely love it. Here's a guy who's a hard hitter and I thought of as a tough guy, with a baby monkey. He's not looking for a crazy amount of attention for it, he just wanted a companion.

Seriously though... LaRon... Umm.. If we can't work out a marriage... How about a play date? Or maybe you could hire me to be a babysitter? I'll even do it for free.
Consider it... Let me know. Thanks.