nifty: i used to believe

Alright kids... There's another site that people constantly add their own words to that you might get hooked on. 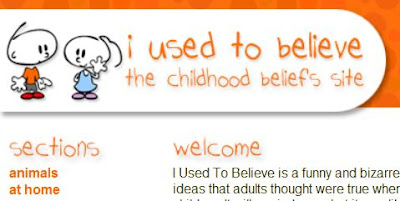 For example: I used to believe that every time you caught one of those white, fuzzy things that floated in the sky [I think they actually come from weeds], that was a piece of Santa's beard and I must have been good.

The site has all sorts of different categories such as body functions, death, grown-ups, religion, make-believe, school, toilets, and of course sex.

Here are some good ones:
So I vote you check it out and add your own.. Not only to that site, but that comments section right below the post.