my weekend at the presidential inauguration and women's march

Honestly... where does one begin when they start writing about the experiences that were the Trump Inauguration and Women's March?

I'm not one who likes history or politics. In fact- I've hated the two things my whole life. This election certainly changed that, at least in some capacity. I used to keep my mouth shut about politics because I wasn't sure if I knew what I was talking about and I didn't wanna turn anyone away from me... now I'm speaking out. There are too many things that we KNOW will negatively affect so many people that I have no problem speaking my mind. That being said- there are still a lot of unknowns. I have no idea what the best way to get rid of the debt is. I don't know what will actually bring jobs back for people who have no modern skills without hurting people who do. So... I will absolutely fight to keep EVERYONE happy when I know what's right, and hope for the best when I don't know what's going to happen.

I've written up some thoughts and a lot of pictures on both the Inauguration and the Women's March on my station blog, but this has always been a place where I share my true, unfiltered thoughts... so here we go. 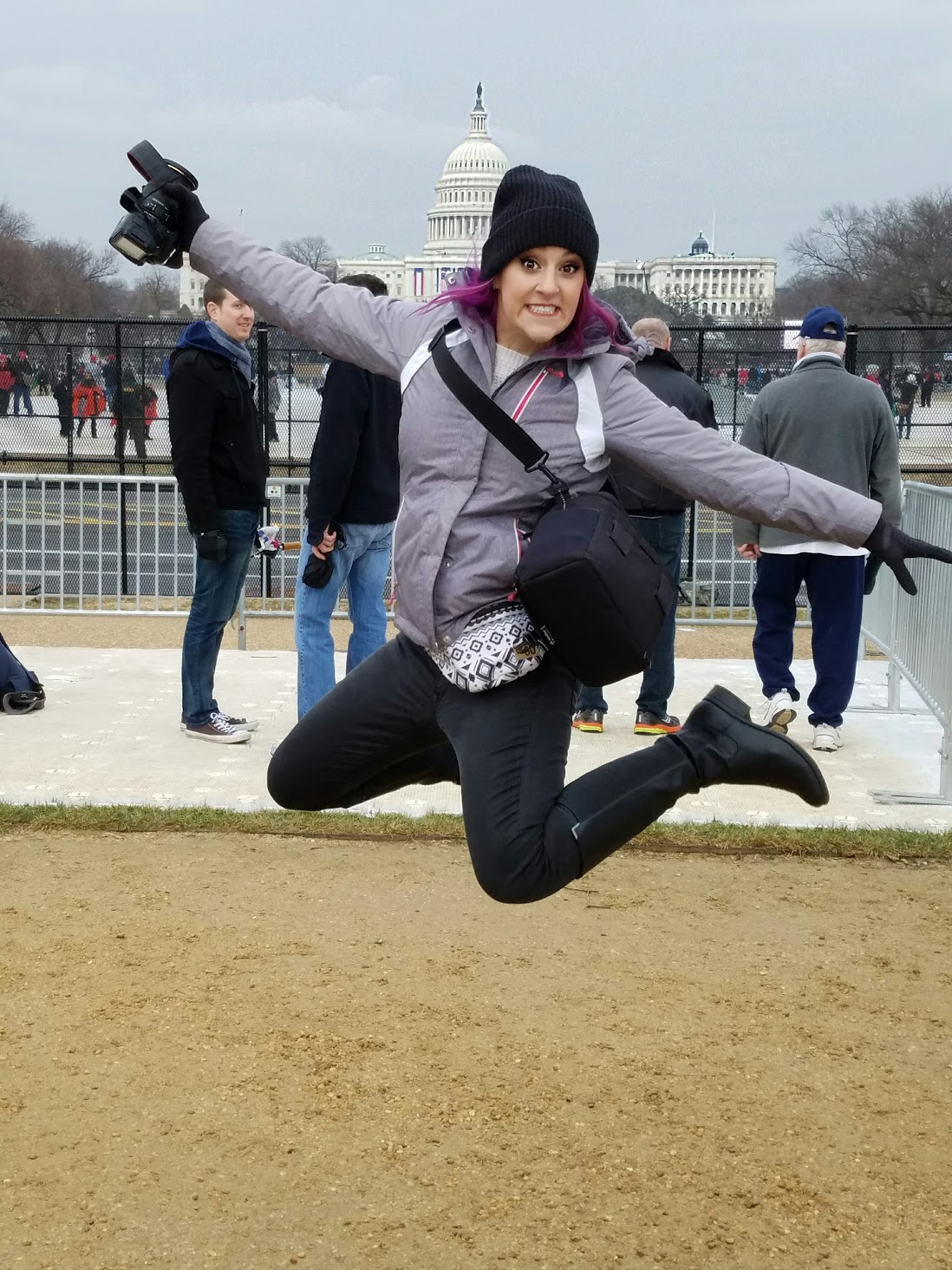 I was doing call ins for our sister station WMZQ, and while walking down there- was looking for anything to say. There were so few people on the streets, I literally talked about almost stepping in horse poop, the fact that Secret Service was complimenting protest signs, and assuming I was the only one late to a party. Aly Jacobs seemed to want me to talk about all the Trump supporters [because country listeners love Trump probably], but I could tell that the real story would be how empty the city was on a day we all expected insanity.

Even when I got inside, there was so much room. Like I could do cartwheels FO' DAYYZZZZ. [That's how I measure the amount of space somewhere, obviously.]

There was also a relatively even amount of pro- and anti- Trump people. I'd say the end total was maybe... 65/35 with majority being for him, but I definitely expected more supporters to be there.

It was so quiet. Chants would start.. U-S-A! U-S-A! Or a variety of others, but they'd never get very loud or last very long. For the most part, people were silent. Unless, of course, someone wanted to speak up to the protesters.

The protesters that I saw were all quiet, simply holding signs. Supporters couldn't handle it. They'd walk up screaming "GROW UP! GET A JOB!" Completely ignoring the fact that these people were dressed in fairly nice clothing and simply/calmly using their right to protest. There were also some mostly-healthy debates happening between supporters and protestors after the Inauguration, which was entertaining. It was refreshing to see a group of Millennials, who get accused for not being involved, for being lazy, all being one way, etc.... speaking their thoughts without losing their minds. I thought for sure a video would go viral from it, but I can't find it. 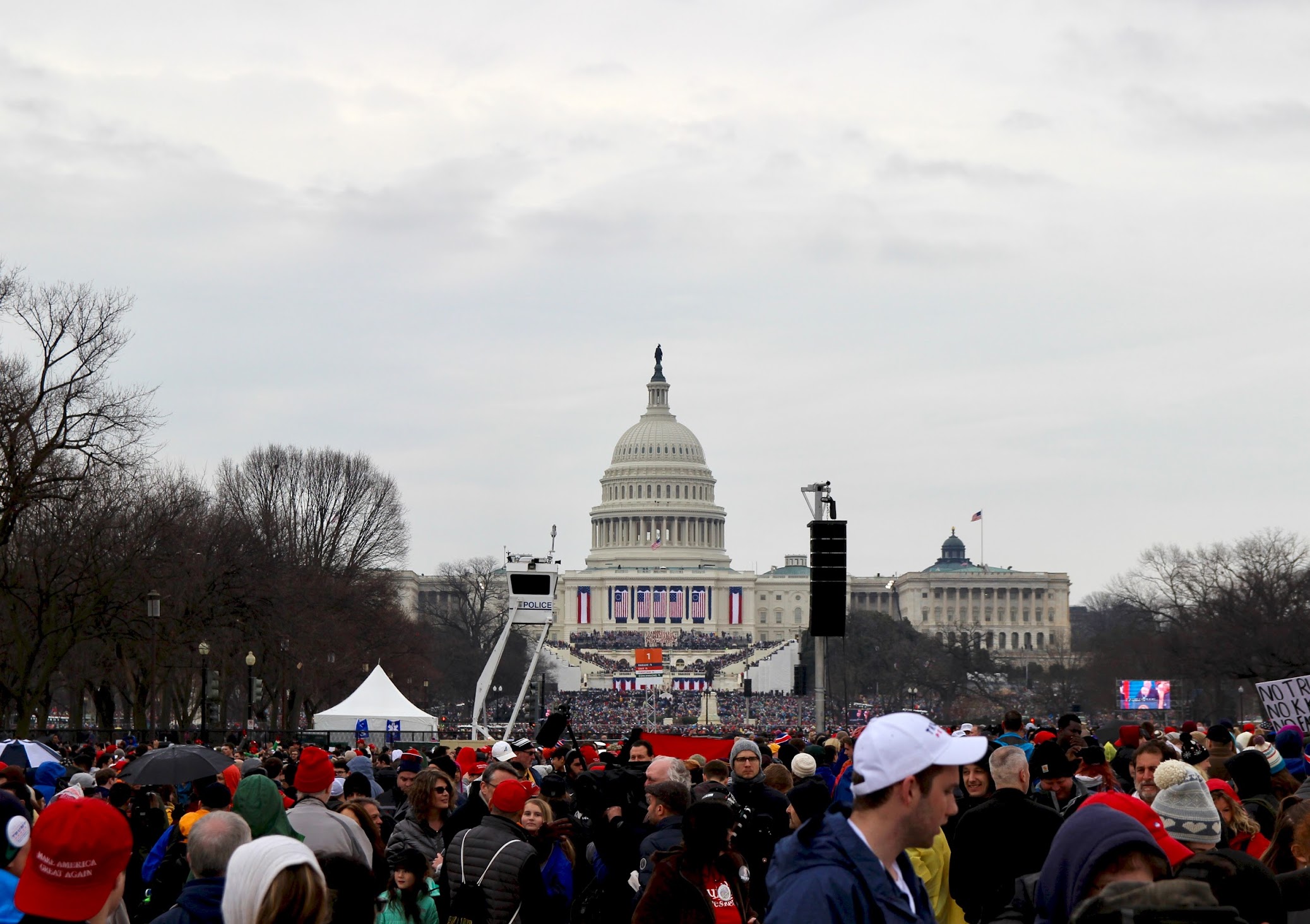 As for the actual swearing in, etc.... Man, that was weird. I'm still in shock this is all happening. I walked around and just looked at people. Saw some people feeling the same as me, and others with tremendous pride. It wasn't until the moment the Obamas took off in the helicopter and I watched it fly over that I lost it.

I mean, really lost it. Full on cry at the National Mall, desperately looking for someone who was having the same moment as me so we could hug each other. The weird thing is, it wasn't only because the future is...... iffy. I couldn't stop imagining this family, who lived in a crazy bubble with the biggest magnifying glass, being thrown back into the wild in an instant. It's the same feeling I get when I watch Real World or something and they have this amazing experience with each other, then have to say goodbye to it all. It's emotional. Bittersweet.

People filed out pretty quickly. They didn't stick around for the parade or anything. I guess some went to the small but scary protest that happened on Franklin Square... but most got food and took their asses home. It was as if this massive event hadn't just happened.

There was no doubt this would be a bigger day than the Inauguration, but it wasn't until someone sent me a picture of the super-packed Metro stations that I realized the possibility of what I was getting into. I always knew I wanted to go down and experience this, but for one of the first times in my life- I wasn't fully prepared in the spirit department. No sign, no pussy hat... just a pink sweater and a desire to be American.

The Metro was packed. The streets were packed. The moment I saw the Capitol Building and the thousands of people on the streets in front of it, I couldn't shake the goosebumps. It was surreal.

Once I got to a huge crowd, I just kept reading signs and taking pictures. I had a goal of making it to the rally, but I was so amazed by everything I was seeing, I didn't feel the need to walk. Everyone else around me was moving, the March was starting two hours early because of so many people, and I just wanted to observe. I saw a group of people on a trailer roof who offered to help me up. After taking some quick pictures, I sat down with a man from Argentina. 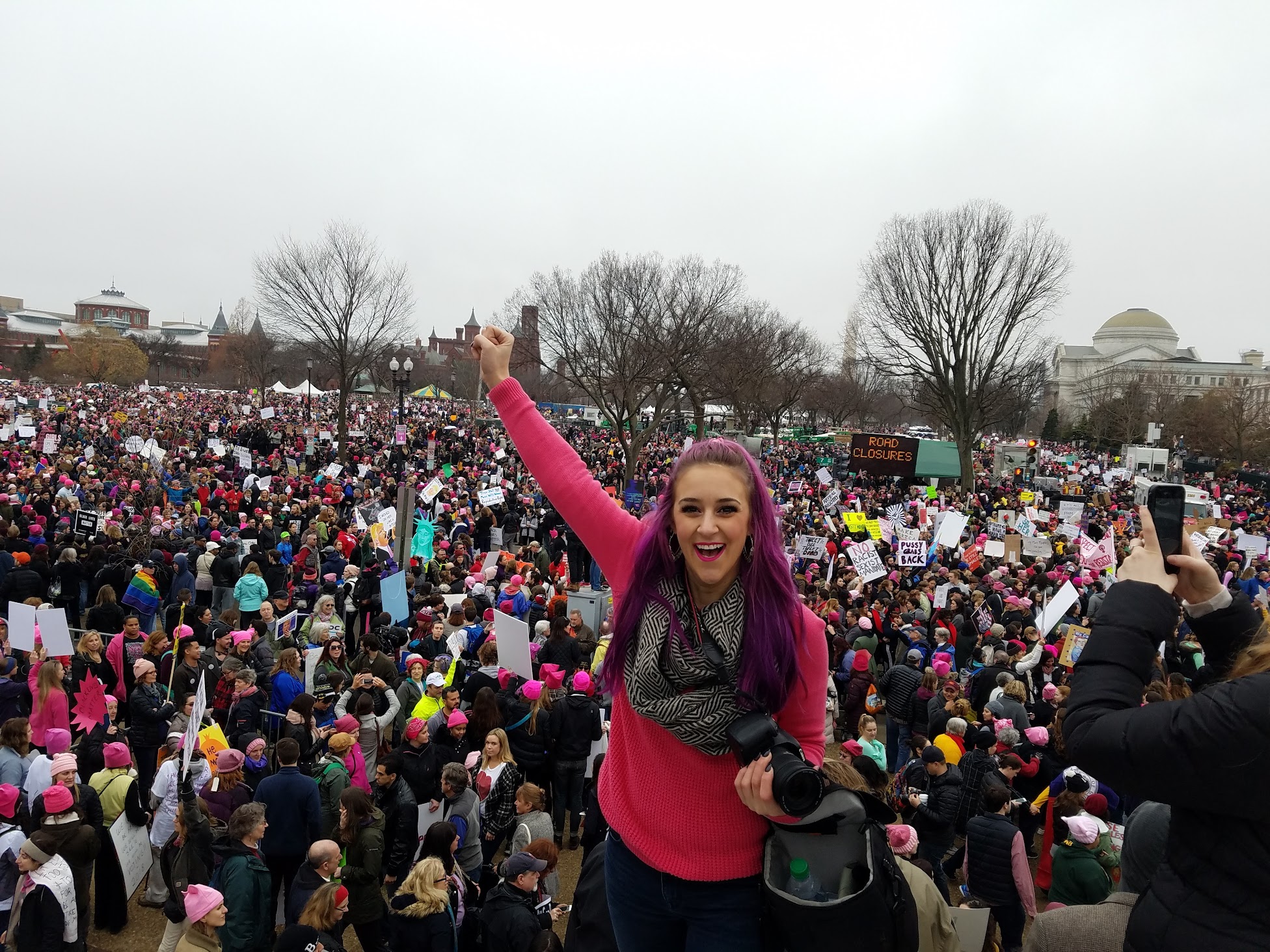 This man came to the US for this event. He said he couldn't miss it. Sure, he'd explore more afterwards, but he came over to witness this history. It was another moment of putting it into perspective for me.

We sat down for a couple hours, just watching all the signs go by. Looking at the variety of people. Old, young, male, female, gay straight, every color under the rainbow... and the LOUD chants. Most of which included "This is what democracy looks like."

There was such a variety of signs, too. It wasn't only about women's rights... It was about climate change. It was about creepy tweets. It was also just a straight up hate-fest on Trump.

Because I'm being unfiltered here, I'll say it did bother me that some signs and people were so hate-filled for Trump. As much as I hate the fact he's in that office and about to make decisions for us, there's nothing we can do about it now. I mean, we might be able to get him impeached, but then we have Pence in the big chair and for the love of this country, we really can not let that happen. Maybe people wanted to bully the bully, but there were much more productive ways of speaking your mind on what you want than just calling out his idiocy.

I still don't know how to really explain what I saw or felt. The worst part- I don't have a picture that really captures it all, either.... but here are some that I will always remember.

So the girl who hates history was a part of it. The girl who hates history also hates the idea of seeing all of this in my kids' history books later. Well, lemme rephrase that. I'll be hella proud to talk about the March and show that even in a world of social media and such, we got off our asses, headed into crowds, and spoke our minds. I won't be proud of the actual news coverage of the events, and the Inauguration/election as a whole. Heyzeus, what will the historians even say in the books?!?!

And to the people who live in DC and didn't witness any of this first hand- what the hell is wrong with you? I was kinda nice about saying that to some of my friends, but seriously- why would you ever sit at home when you could witness this in your backyard? When you do have kids, are you gonna tell them the truth of being too cool to go down and at least see what was going on, or will you be like "OMG YEAH I LIVED IN DC BACK THEN IT WAS CRAZY!"? You don't wanna be a liar to your kids... Plus- haven't I said this enough?: Never turn down the opportunity to experience something.

So much of pink and if you want to be so much of pink then purchase generic viagra in any dosage, you will be pink for next 4-6 hours :P