My ADD-ness has spread into the way I travel.... and I don't mind it at all. Why visit ONE place, when you could rent a car and make it an adventure/road trip?

This time it was all about Florida. I only had three days to work with, not a lot of money, and I booked it less than 3 weeks before I left. Luckily, flights to Florida are pretty damn cheap most of the time.

The first decision I had to make: Atlantic Coast or Gulf Coast? Thanks to pictures of Siesta Key, the Gulf Coast was the winner, and Tampa would be the starting point.

With a bunch of friends in Tampa, it makes it an easy starting point. My first gamble was on the rental company. Sixt had an incredible deal on a convertible, and reviews that were either awful or fantastic. I'll take a gamble on saving $200 and not getting the car I want. Luckily, even though they told me they didn't have what I reserved, I saw it in the parking lot. A beautiful VW Beetle convertible. [LOL at making him think it'd be something like a Mustang then being all HAHA SUCKA I'M DRIVING EXCEPT FOR WHEN I WANNA TAKE PICS!] 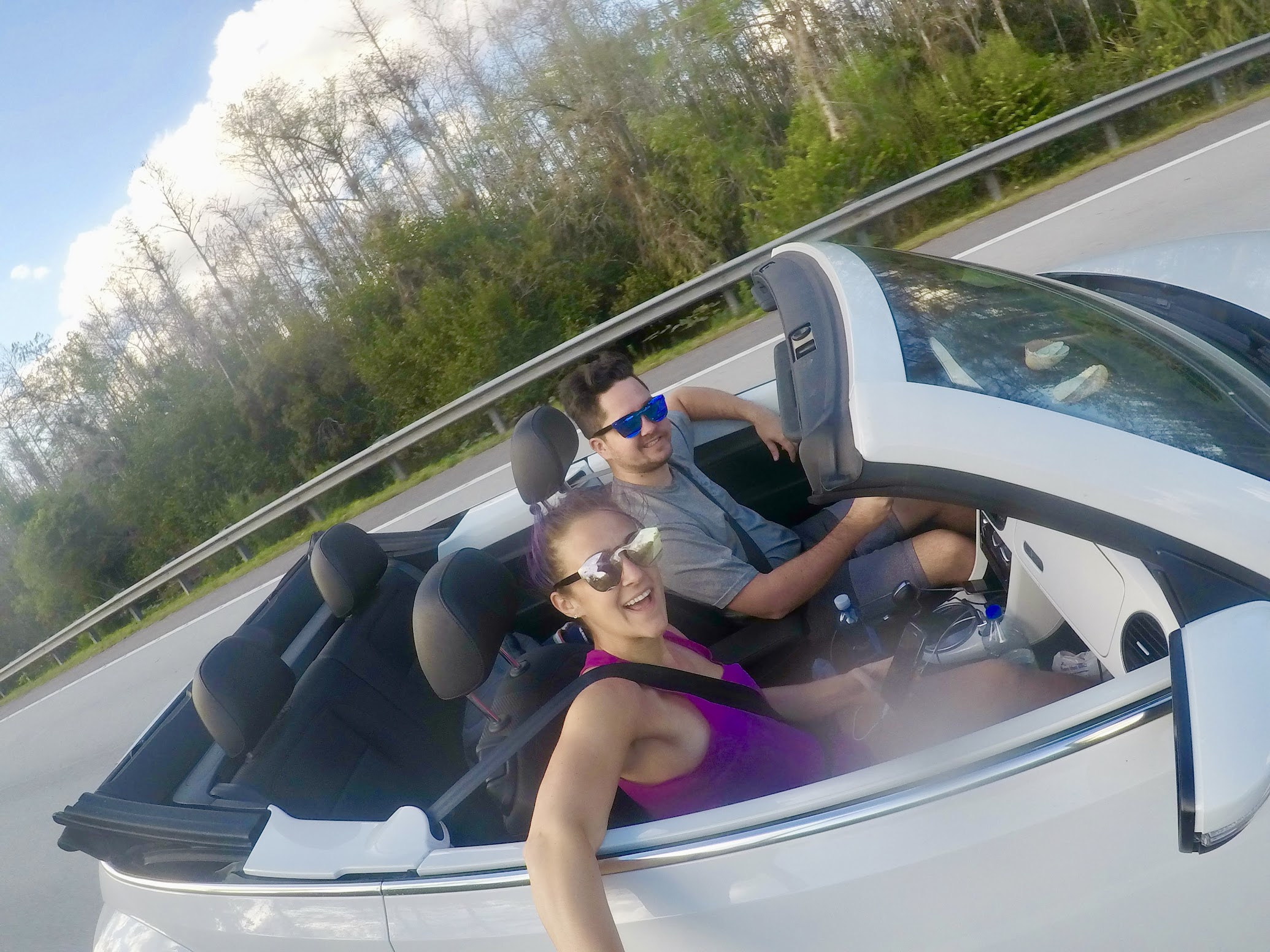 There was some solid people watching in SoHo Tampa [and a huge, nice hotel that did not get enough use] before it was on to the next stop: Siesta Key.

It's America's #1 Beach, so I kind of expected it to be a little crowded, but man I was wrong in that expectation. Even at one of the main public parking entrances, there was barely anyone around. Maybe it was because it was so huge and flat that it felt empty, or maybe people hate little waves, clear water, and searching for sand dollars. When is the last time you've seen this much beach and only three people in the frame?! 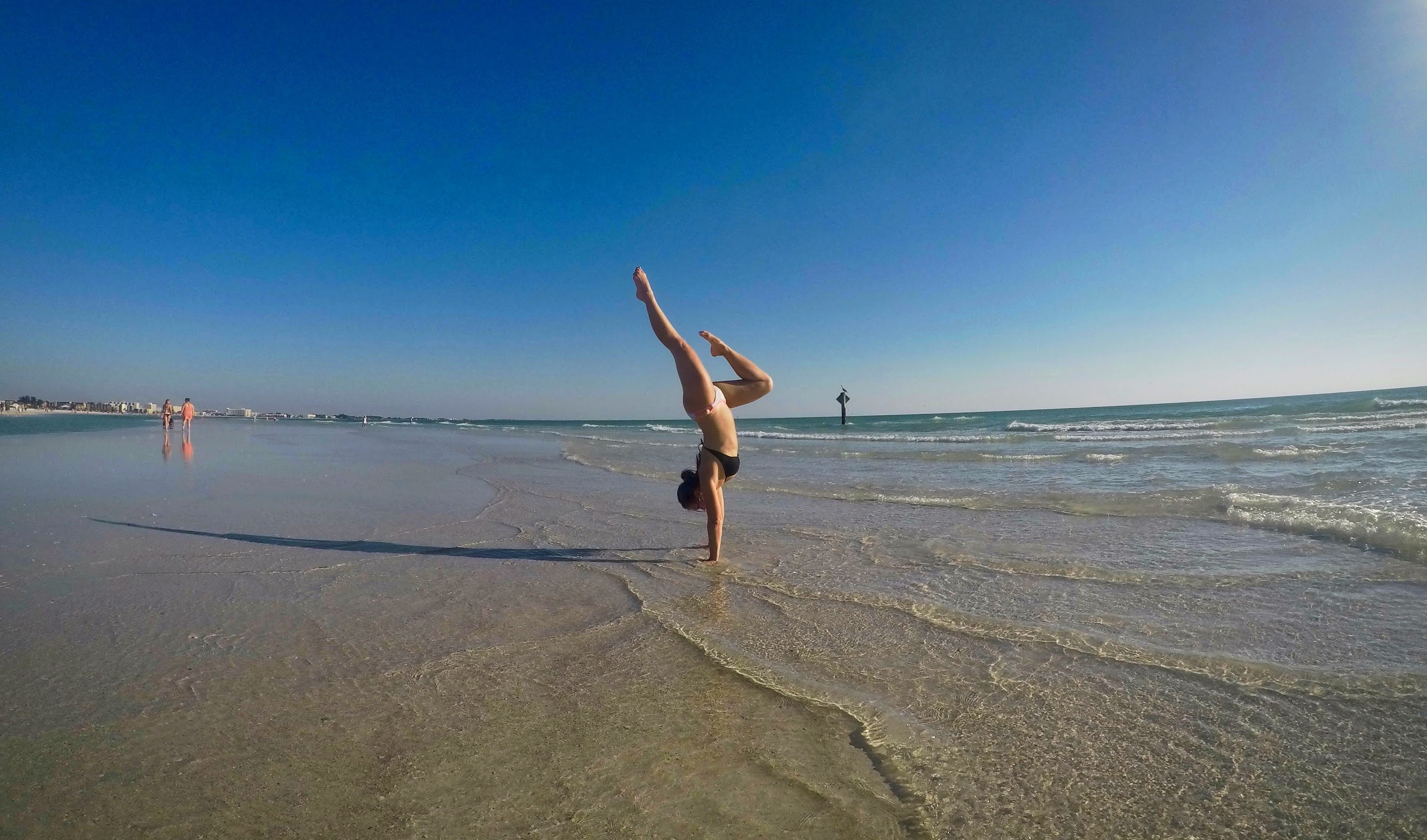 I remember going to Sarasota as a kid and searching for sand dollars for hours with my mom... we'd wake up really early and go before everyone else found them. Now I know the real trick is to look when the tide is changing. Suddenly I was finding ALL OF THE BEAUTIES, and also a lot of really ugly rejects. I left those for the lazy people who didn't wanna find them in the water.

Finding good food has surprisingly become one of my favorite things about traveling. Okay... I say surprisingly but really, I've loved food my whole life... I'm totally fine with eating gas station food most of the time, though.. just NOT WHILE TRAVELING.

Ask people who have been... check Yelp... do research. The meal could be the best thing about a trip. [I still can't stop thinking about the meal I had in Key West and it's almost been two years!]

Shut up Elizabethany and show the damn food. 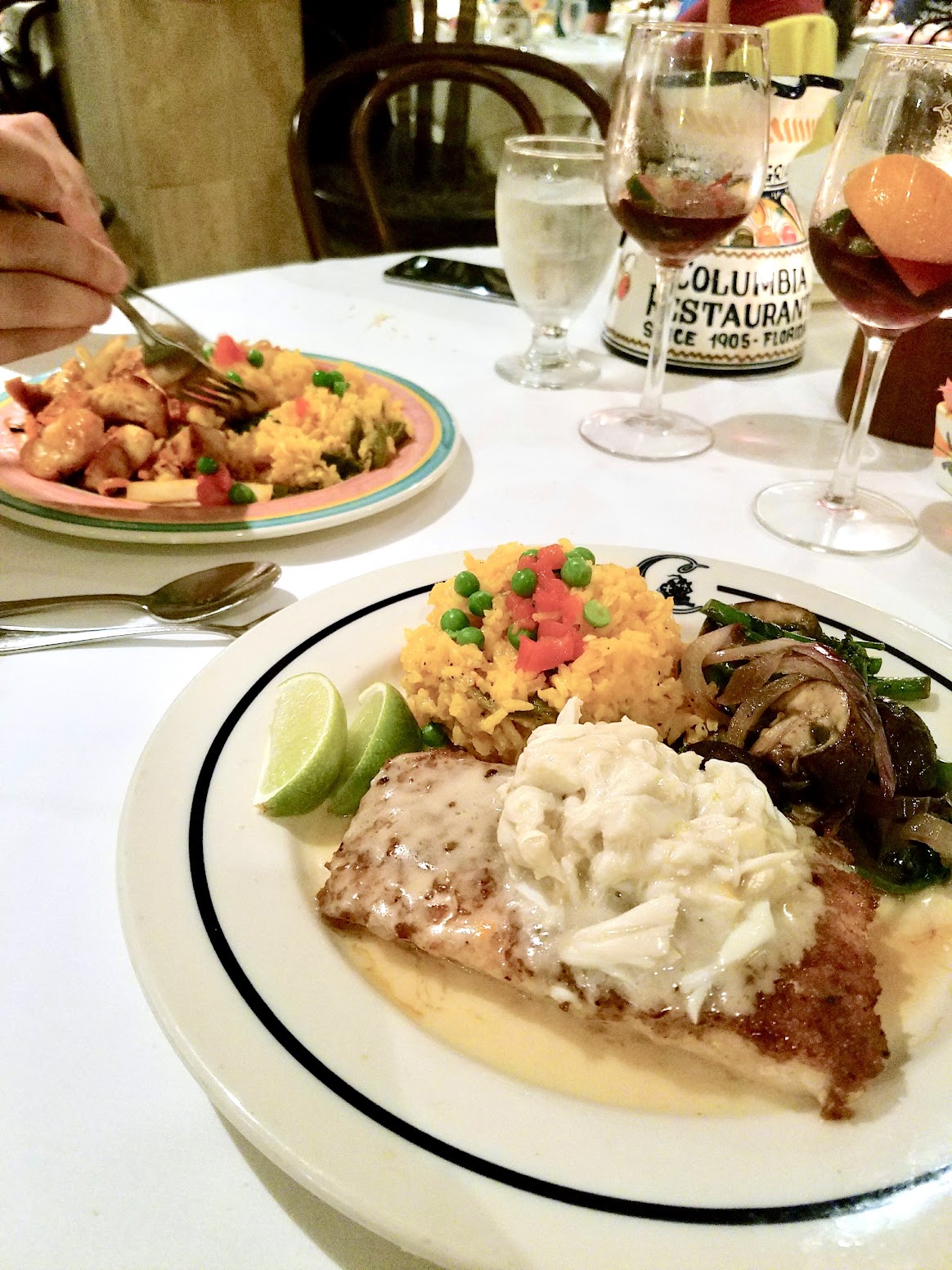 Thanks to my boss and his wife, I knew I should skip the oceanside restaurants and head a little north for The Columbia Restaurant. Cuban food, delicious sangria, and so many options. What you see on my delicious plate is Mahi Mahi topped with crab and hot damn- I'm glad I saved some so I could have it for a second meal.

This is when I made my first mistake. Even though I purposely didn't book a hotel for night 2 ahead of time, I stuck to the plan of going to Ft Myers instead of staying in Siesta Key/Sarasota. As we were driving away, the town was picking up, the old people were going to sleep, the people who were hungover from the night before were coming out, and I love a good beach bar... but we headed south to check out another city.

The problem was.... there was no exploring of Ft Myers. Maybe because it was Sunday night and there were no bodies to be seen walking around, or maybe it was because I had probably the worst sunburn of my life. I don't get sunburnt. That's something silly that white folk have to deal with while I put on SPF 8 and get a slow brown. I learned a valuable lesson that day in Florida: DO NOT DRIVE A CONVERTIBLE, IN THE MORNING, WITHOUT SUNSCREEN ON. YOU WILL GET VERY BURNED IN LESS THAN AN HOUR.

Okay, there may be some dramatics coming into my whining, but think back to your first/worst sunburn. You were crying and complaining for days too, RIGHT?!?

The lesson was learned, sunscreen was on, and Naples was the next stop. I don't think I've ever seen a cuter town in my entire life. So much green, and vibrant colors in general.

There were also these huge trees, that I've now learned are "banyon trees." If you've never seen a huge one of these in person, you're missing out. You're also missing out on an old person yelling at you with their half-voice if you don't climb it. 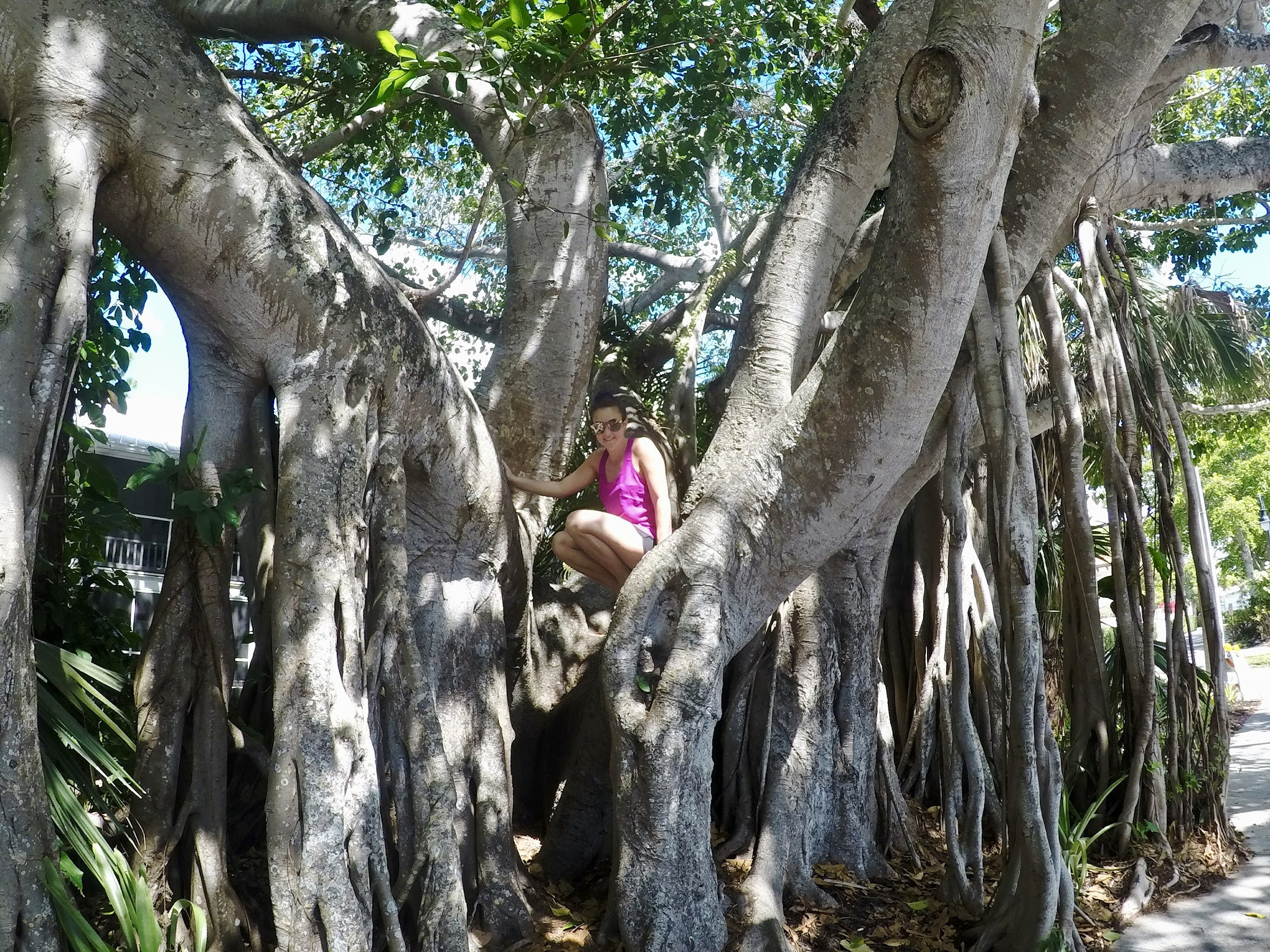 The pier was just as beautiful... and full of gray [hair]. People were fishing, then throwing their fish back into the water where dolphins and pelicans would get them. The dolphins were SO close to the pier and even the swimmers, but of course I don't have pictures to capture that. You don't really need more than a few hours in Naples, I don't think... unless Grandma June is there or something.

It was time to take on the Everglades. I had done some research on all of the different airboat rides, but in the end- unless you're paying the big bucks for a private boat, they're all highly rated and about the same price. Wooten's had an animal sanctuary and a late final-boat time, so that was the winner. They had a white tiger, lots of crocs, otters... all kinds of babes... but we were there for the ride.

I was a little discouraged when we got on this big ass boat... I was so rudely thinking the big guy can't do tricks... but it did. All the spins, all the coasting over mud, and quite a bit of fear tbh. It's only about 45 minutes long, but that's all I needed. Here's a quick clip:

And the third stop in one day: Miami.

There was a restaurant that I went to by myself the last time I was in Miami, and I was determined to find it again. It was so cute, the vibe was great, live cuban music was playing.... It's called Moreno's, and it's hiding in an alley attached to a hotel. The service was worse than I remember, but it was still such a good vibe with neat drink options that I wouldn't write it off. Now is when I should say Miami brought the crazy party, there was so much bar hopping and fancy drinks, and dancing next to rich people... but I've been having to severely limit my drinking lately. [If this is the first time you've heard this, it could be quite shocking.... but I've been sharing on the show and some on social about my migraines. Something about drinking is triggering cluster migraines and it is totally life changing in all the awful ways.]

Instead of partying the night away, we walked along the beach/strip of hotel pools that are probably full of rage on the weekend. Then I found a patch of green in the middle of downtown Miami Beach and decided to lay down and look up for a while.

When's the last time you've done that? Put your phone away, shut the bleep up, and just relax and observe.... It was foreign to me, but hot damn did it feel good. So good, this picture of my view over here gives me happy feels and it's not even a good picture.

The final day was all about Ft. Lauderdale... specifically Ft. Lauderdale Beach Park. Who's gonna turn down a bunch of picnic tables, an outdoor gym [lolz not that I'm gonna use it on vaca but it was fun to watch the babes on it], and nearby restaurants?! No one smart, that's who.

It was another huge, flat beach, that was pretty empty on a Tuesday. There was also a huge chair so *cue photoshoot.* 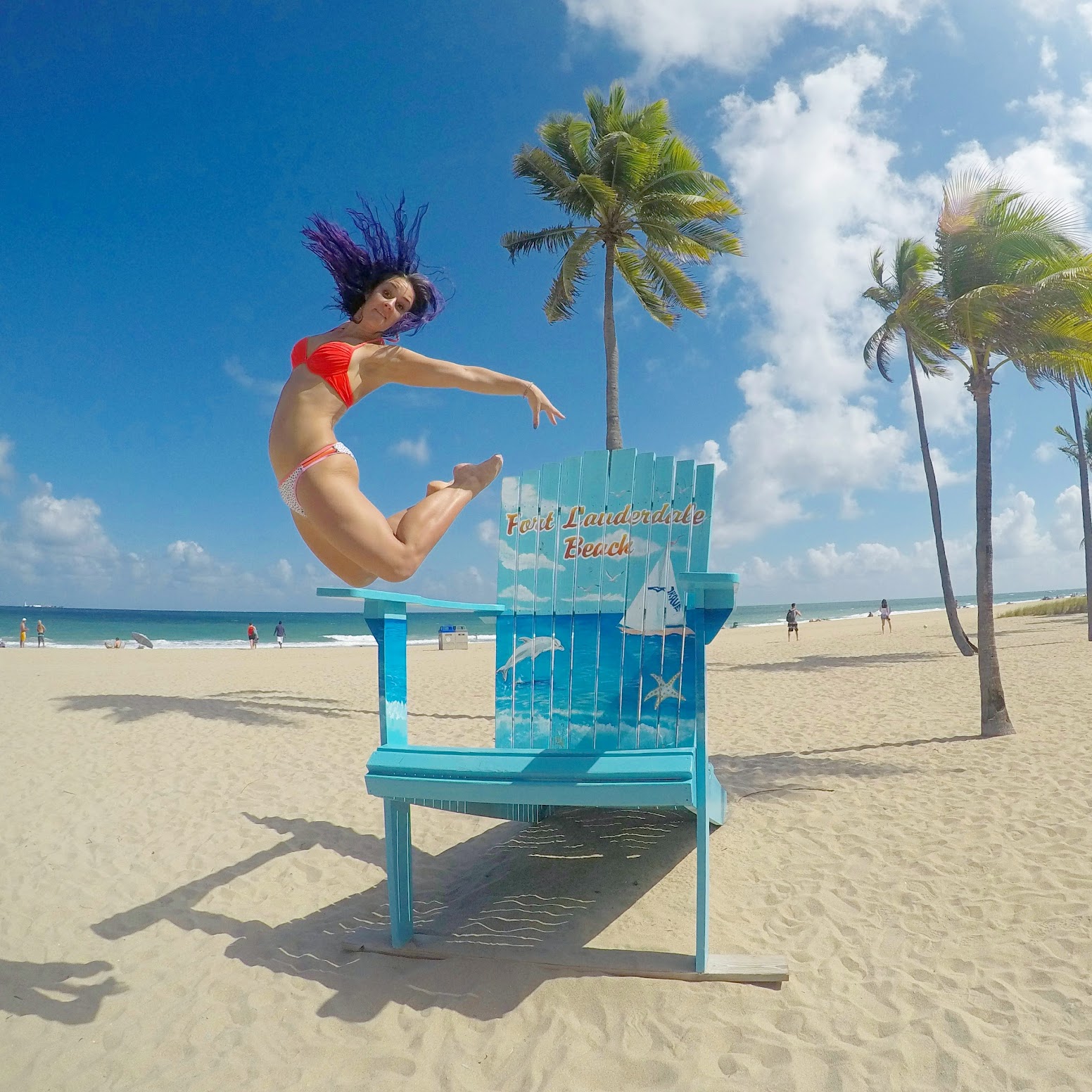 I had been looking for a good place to get fish tacos all week and finally found a dive bar celebrating Taco Tuesday! Perfect! ...except that their Taco Tuesday was strictly chicken and beef since they pump out a bunch of them. They were $1 each and hella good.

Somehow the entire trip was a combination of adventure and relaxation. Sure, there was a lot of moving around city to city, but it was only 3.5 hours total driving, and a lot of laying around once we got to each place. If you're looking to do the most amount of traveling and sight seeing along the Gulf Coast in 66 hours, here's where I'd go again:

I had hoped to get to Sanibel Island and also this coral castle in Miami, but it would have messed with timing more than I'd liked. You can save a lot of time by getting sandwiches to eat at the beach and only eating dinner out. Drive in the morning or at night, and soak up the daylight hours away from the car. Just like when I went to California, I starred places I wanted to see on Google Maps, then picked the best route/timing to see as much of it as I could.

66 hours.... that's literally all we had to do all of this. Make the most of your time, always.