When you take a trip to Puerto Rico, you take a lot of pictures. And since posting everything from California ultimately overwhelmed me, I decided to break this trip up.

One of the things my coach told me about his hometown was "the cave beach." A little Google machine action helped me find La Cueva del Indio in Arecibo. Holy breath taking. 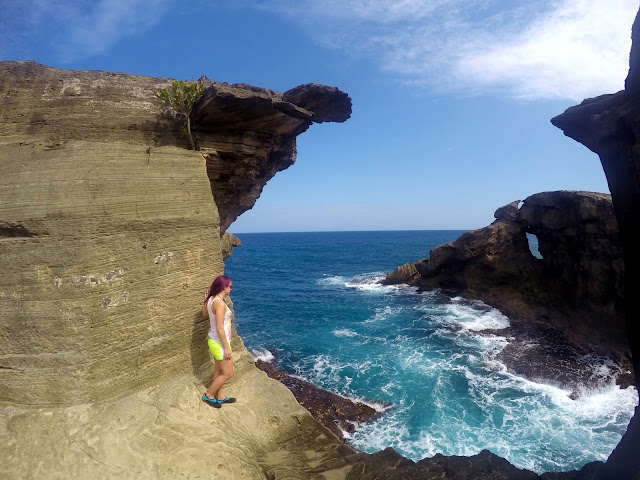 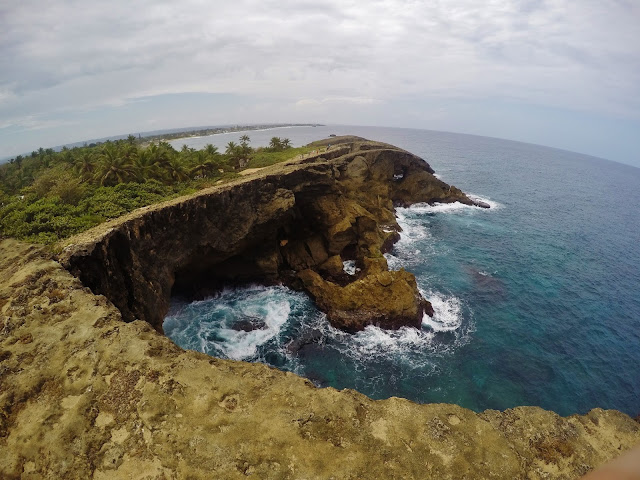 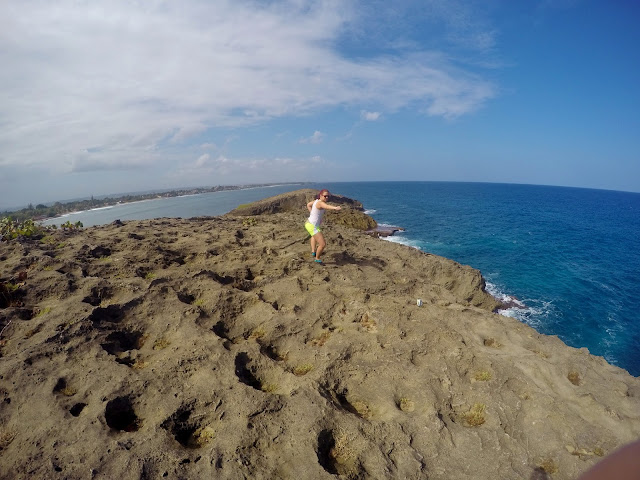 Posing for pictures is tough sometimes. 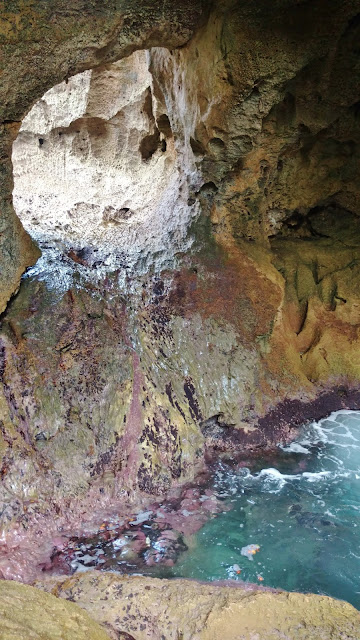 The inside was turning purple and I was all heart eye emoji over it. Later I found out the water is normally higher and you can swim through/inside the cave. Looks like I'll have to take another trip. Damn. 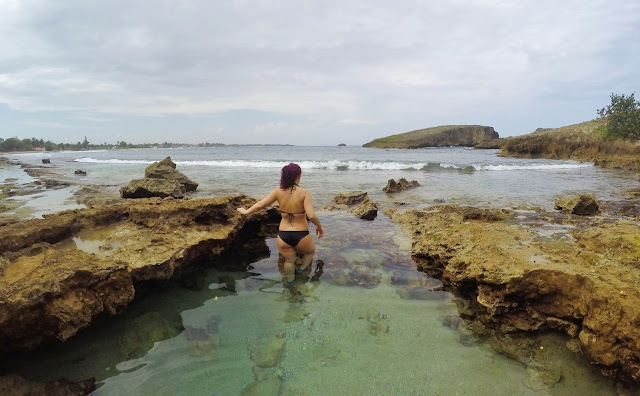 Along the trail to the cave, we found this private "pool." Don't worry, you're not the first thing to think what you might be thinking right now. There were condom wrappers galore nearby. [Not mine! Fortunately... or unfortunately... you decide.]

After three hours there, we headed back towards the east coast to El Yunque, the only rainforest in the US forest system. [#Facts on love, EB!] My 80 year old knees were scared, but everything was so worth it. 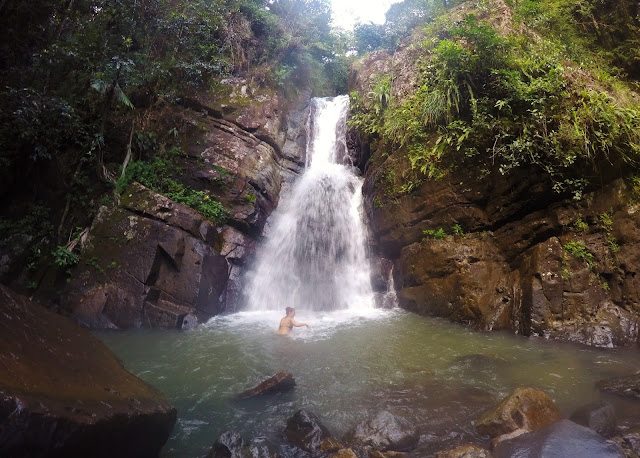 I saw someone standing under the waterfall posing for a picture and knew I had to brave the cold, too. What I didn't pay attention to was how they got over there. Walking on the rocks is not okay. DO NOT WALK ON ROCKS. Three nasty bruises, a swollen ankle and knee later, I settled for this picture, then watched "pros" crab walk into it with ease. Thanks for the tips ahead of time, a-holes. 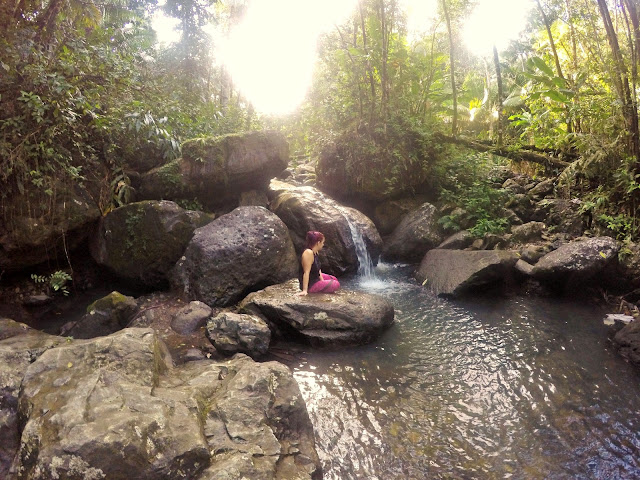 If you ever hike these trails, you might be tempted to do the Big Tree Trail to the La Mina Falls because it's easier. You could do that, but make sure you also walk the La Mina Trail, too. It was SO much prettier to look at. More falls, more places to stop, and if my old-feeling body can handle it, so can yours.

The home for the next two days was in Fajardo, another short drive to the shore. I found another Airbnb just a couple days before checking in for $70/night. 24th floor of a condo RIGHT on the water, with a pool, a balcony, and quite a view from the breakfast table. 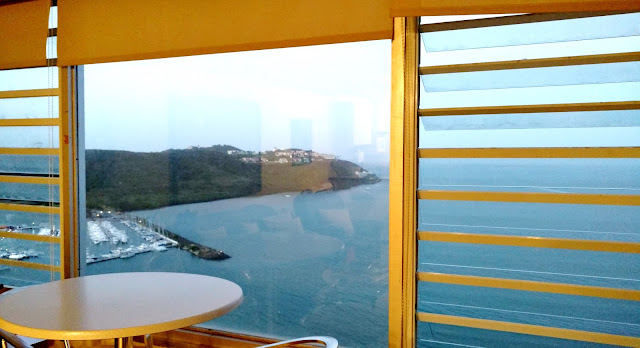 Really tough to wake up to this while all my friends were waking up and scraping snow off their windshields.

While beaches are another short drive, we were super close to some of the excursions, the bioluminescent bay AND the ferry to the other smaller islands that everyone highly recommends [Vieques and Culebra]. What I didn't know until it was too late is that the ferry takes a couple hours to get to the other islands, so it's definitely a day trip. 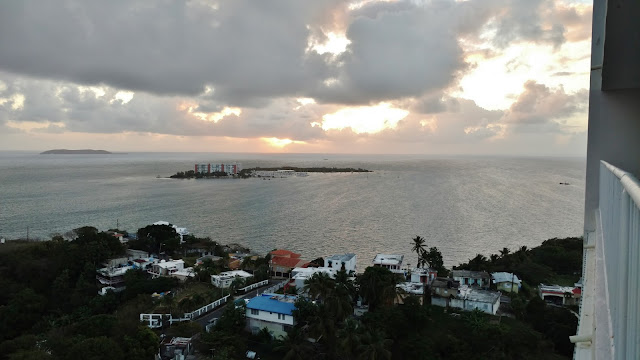 I have no idea what that island is. I'm just showing you the view from the balcony again because it was ridiculous.


As much as I grew up/love being the beach girl who just relaxes by the ocean and gets tan on vacation, it's really incredible when you put on some hiking shoes and really explore some landmarks. Turns out, having incredible pictures to last forever is cooler than having a darker tan for a couple weeks. [GASP. My former self can't even believe what's happening in this post right now.]