It's been an exciting three days with the station! We had a performance with Cody Simpson at the mall on Sunday [more of that to come... I'm still editing the massive, deafening screams], and then had MKTO and Emblem 3 in for an acoustic performance today! 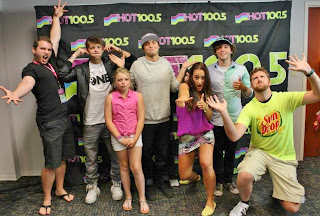 Emblem3 was on X-Factor and had a fan base that I never understood, but now they've got a catchy song about the only cool Kardashian- Khloe. [Or "Chloe," as they say...]

I got a chance to ask them a couple questions before their performance. Unfortunately I didn't get to ask the questions I was warming them up to because they totally took the interview and derailed it [in a funny way] and their "team" said it was time to play some music.

EDIT 8/7: LOL at the comments on the YouTube page. People are [trying to] eat me alive! Saying I'm rude and disrespectful... it just made my morning. Some people don't know how to relax.

[[[[EDIT 3:30PM]]]] Someone took the video down. It wasn't me, nor have I been informed of the reason why it was deleted from the station's account. As of now I haven't gotten in trouble, and I don't plan on it. I did nothing wrong but joke around with some guys who were non-stop joking the entire time. I'm not even sorry that I'm not sorry.

EDIT 9:30PM. Someone stole/re-uploaded the video.

I knew they were a bit out there, but I honestly didn't expect that interview to be so ADD and silly. It was fun, though! And I'll take a silly interview over a boring, scripted, etc one any day!

I wish I could tell you more about them, but we didn't have a whole lot of time beyond what you saw to get to know these guys. They did make a different pose/face in every picture, which was neat. Also, Keaton is clearly the one that keeps them all on track and probably gets a little upset when they're making fools of themselves.

MKTO was awesome as always, and performed in their sweats. One more meet-up and we're officially BFF's. [I've decided it takes three meetings with someone before you can claim that status.]