This week has been packed full of fun things at work. First I helped a listener video chat with Demi Lovato, and yesterday I got to go to the Mike Posner/Ke$ha concert! 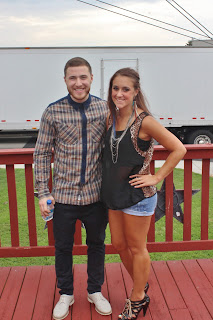 Like I said on What Ya Wearin Wednesday, I freakin' loved the fans that came out to this show. They were dressed fun, and they acted fun. There were glitter bombs everywhere, people dancing like they're Miley, and even grown as people sittin' in the second row.

But before the show began, I got to meet/interview Mike Posner. Walking in, I expected him to be fun, outgoing, etc... All the made up conversations I had in my head to prepare for the interview were of us goofing around. Boy, did I prepare for the wrong interview.

He was super soft spoken, calm, and just a nice guy. It kinda threw a lot of my plans out the window, but I tried to warm him up and make it fun. Turns out, he needs a pop culture lesson.


[Watch out for the quick change of expression after I mention his BFF Justin's antics...]

Genuinely shocked that someone could actually be clueless to Magic Mike. WHERE HAS HE BEEN HIDING?! I had also asked him some other fun questions, but they ended up being pretty boring.

He definitely loosens up when he's on stage and puts on a pretty good show. Unfortunately for him, all the mics stopped working while he was up there... When he came back, he ran all the way back and through the lawn to make up for it.

Though I don't have anything to show for it yet [some people take their time getting pictures up from a big event!], I got to meet Ke$ha! Holy bajeezus. I thought this was gonna be one of those moments where I got star-struck, because she's such a big personality it almost doesn't seem real. Well, she was real.. real freakin' awesome.

She's one of the few people to ever thank us for playing her songs, and genuinely mean it. I also thanked her for being the reason Corey has a beard, because otherwise he'd still be hella awkward looking.

As for her show- AMAZING. I figured it'd be good, but she really puts on a show where you gotta keep watching. Plus- she's so damn sexual about everything, it makes me feel like a prude! Her dancers were also fantastic... so fantastic I felt the need to make some gifs.

Yeah, those are dudes. I thought I had gotten them while doing the splits and ish, but apparently I was way too mesmerized by that point. I did get some good pictures of it, though.. and the whole show:

Ke$ha at nTelos Wireless Pavilion, a set on Flickr.

[Also: Here's a video from one of her songs!]

I honestly don't think I've ever sat that close during a show. It was a perfect one to get lucky with. [And by lucky I mean one of her record reps helped us out and gave us her tickets.]

Now if you'll excuse me, I need to go listen to her whole album again and dance around the room like a D-class stripper.