clarissa is getting a new novel!

With everyone freaking their freak about Girl Meets World, it's only right other things try to make some kind of a comeback.

While this one isn't nearly as exciting as GMW, it's pretty neat! 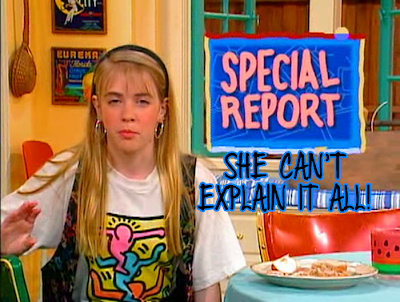 It's apparently true! She lied to us for so many years! Now she's 23 years old, has a career in journalism, and is writing a book about it! It shall be called "The Things I Can't Explain."

Okay, Melissa isn't, but the creator of the series is! It's due out by the end of next year and even though I don't read, I think I'll be obligated to pick up a copy. Maybe she'll have some new fashion advice for us all, too.

In case you didn't know, MJH is publishing a book later this year titled "Melissa Explains it All". Ironcially, another 90's icon, Candice Cameron, has a book coming as well later this year.