what i've been wearing- 3 new outfits under $50

Well, I've been trying to make sure I wear all these clothes I've been getting on clearance after seeing so many ideas on Pinterest... so here goes nothin'! I've told you before, I don't consider myself any kind of professional stylist, so any suggestions are beyond welcome!

This is actually what I'm wearing tonight to my club night [at Bayside on Shore Dr, for you locals! I'm there every Tuesday! Tell me you saw this, I'll buy you a drink!]. It's warm outside, and I've never warn this shirt-dress that I've had for 2 years, so I figured it was time.

-dress from F21 for $9 [similar from Target]
-leopard tights from Target I think for under $10
-booties from GoJane.com for $15ish
-jacket from Target for $15
-"necklace" was actually ripped off a shirt that was so "college years!" It was a halter and ties in the back, and I kinda love it as a necklace now.
TOTAL: $49

At first I thought the leopard tights were a bit much [I originally bought them for a Ke$ha costume], but now I think they're perfect for the understated dress. This outfit totally happened on accident, and I'm not mad about it.

Believe it or not, this is a skirt ON TOP of a DRESS! [And on top of a couple layers of Spanx....]
-dress from Ross- $12 [similar]
-skirt from F21- $8
-tights $5 from Target
-beige blazer from F21 clearance for about $8ish?
-same shoes from GoJane.com
-gold earrings with one big fushia rhinestone at the end for $1 at Body Central
TOTAL: $49

This was for a fancier club opening so I was pumped to finally have a reason to actually get dressed up, until I realized I had spent the past 7 days doing Restaurant Week. Luckily I magically came up with this and felt pretty damn confident in it. 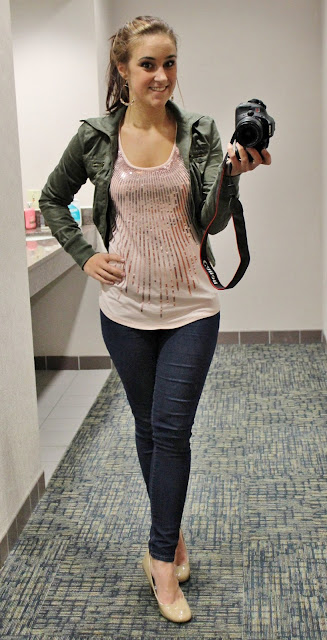 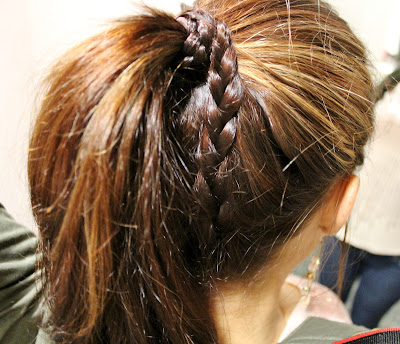 I didn't feel like leaving my hair down, but hate the plain old pony, so decided to bring a braid from underneath over and around. Now that I see this, I wish I would have started it even further under/over, but it'll do.

Well that's a feeling of accomplishment rushing through my body right now. I can get dressed in more than just a hoodie or sweater! Whew. Now I just need to get some color on my body. Woah.

Is it my imagination or are you becoming more of a fashionista with each week that goes by? All three outfits look nice, especially at under $50 each. The Forever 21 shirt-dress and leopard tights look nice, I love the colour of the Forever 21 skirt in the second photo. Normally I don't go for the one-shoulder dresses but the lace looks pretty as does your hair over the bared shoulder. You made me smile with the "And on top of a couple of layers of Spanx". I also don't normally go for tanks, but the one you picked from Charlotte Russe is pretty (what a bargain) and under a jacket it looks great. Fancy underneath over and around with the braid. I'm liking your fashionista leanings and hoping I get to see you do some super ultra-feminine girly outfit posts in the future - that would be a huge challenge for such a frugal fashionista. :)