beyond the real world cameras: blowing kisses goodbye with brandon

Brandon put it perfectly last night when we talked about the hate between the roommates of St Thomas- When you cast a bunch of people from the East Coast, they're just going to compare dicks all day.

He's been one of the most straight-up, honest people of this season and it was sad to see him have to leave a couple days early, but I was glad to get some alone time with him on the phone to talk about it all.

Who he was with when he made the oopsies, what else happened with the girl he got hammered with, and whether or not he still thinks Swift has no respect for the ladies... he answered it all. I also had to call him out for lying to me before and being cute while hooking up with said drunk girl. [FYI: Don't tell him he's cute around other people. It'll ruin his badass reputation!]

And to celebrate the VMA's, I also asked him his favorite MTV moment of all time.

Yeah, we got slightly inappropriate at the end of that but whatever. 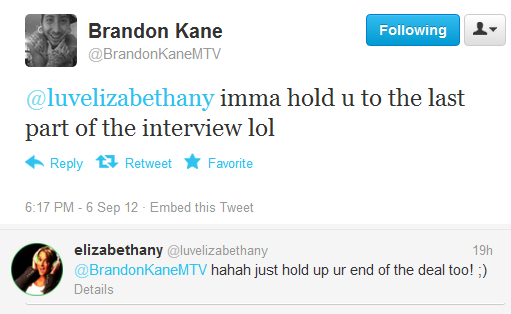 The finale is next week, and as I said, I won't be able to watch it live! BUT! I'll have all sorts of end-of-season polls that I'll want you to answer so we can give out some awards to these roomies. Feel free to tweet me your thoughts as you're watching!