pics/video: an afternoon with big time rush in the studios

I shall call this "the week of teeny bopper artists." First Cody Simpson, then Big Time Rush... and I KNOW the high schoolers love some punk-pop, which Breathe Carolina will bring on Friday. I'm not mad about it. Once upon a time I was acting the same way with NSYNC.

Big Time Rush is a band from Nickelodeon, so obviously the kids LOVE them. [I can also confirm to you that in real life they're in their 20s, and certainly act like it. They're awesome!] We had a bunch of kids/parents come in for a little meet and greet performance that we UStreamed. As of now, over 19k tweets have been sent about the Ustream ALONE. It was a pretty huge day. 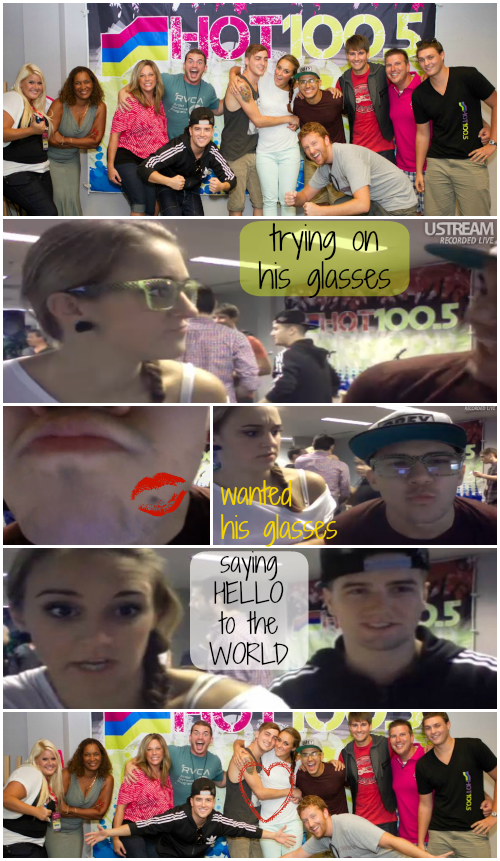 As you can see, I became BFF with three of them pretty quick. I think I made girls cry all over the world when Kendall [the one hugging me in the top and bottom pics] kissed me on the webcam. Carlos, with the glasses, was probably the most fun in a talkative and outgoing way. Plus- He had awesome glasses. And I can't tell who is the "hott" one in the group, but I'd hope it's Logan, the one in the black hoodie/hat. He's a hot-tottie.

Here's video that my coworkers shot/edited:


[There's also more video to watch on our Ustream channel!]

If only I didn't have a show to do, I coulda gone and hung out with them post-concert... Stupid radio show.. Nickelodeon-blocking me.

On a real note: It's awesome to see how excited listeners and people all over the world were getting as we made it possible for them to watch this. The single best thing about my job is being able to connect with people, and nothing is better than doing it in person or on a level like this.