"I talk top 40, but I listen to country." That's what I had to explain to a lot of people on Saturday. It was my sister station, The Eagle's, 5th annual Winterblast concert with a long line-up of artists such as Sunny Sweeney ["From a Table Away"], Gloriana ["Wild At Heart"], and Josh Turner [he's the one with the real low voice, who has the "Baby lock the door and turn the lights down low" song that Scotty McCreery made even more famous].

My coworkers, BFF Mandy [who is normally referred to something much more inappropriate on here, but I can't put her face with that name] and I were all hooked up with a sweet VIP room with free beer and food, plus access to all the artists as they came in for interviews. During our off time: there were a bunch of cornhole games upstairs!

Here are some pictures and deets of my meetings with them!: 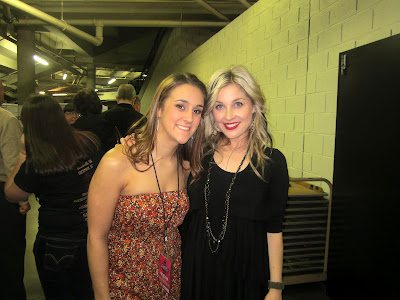 Sunny was totally nice and absolutely gorgeous, but seemed to always be in a rush, so I didn't get much of a conversation with her. Hmph. 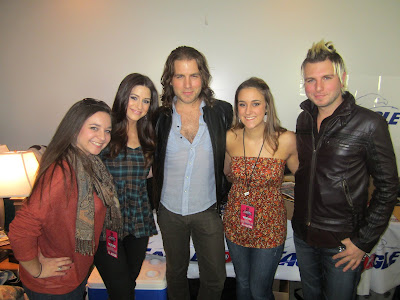 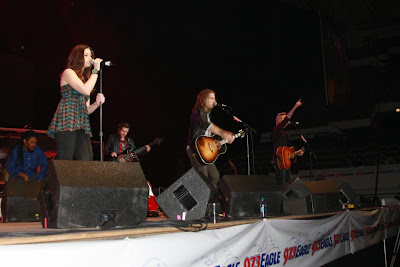 Everyone in Gloriana was awesome! [You might remember them having a fourth member, Cheyenne, who used to be on MTV, but she's outta there now.] They were a little late, so I made a bet with my boss Shomby on who was to blame. I won! It was the blondie man who took forever to get ready, while Rachel was first. Duh. 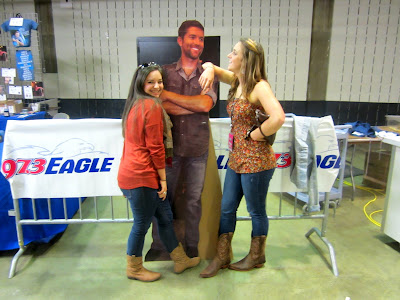 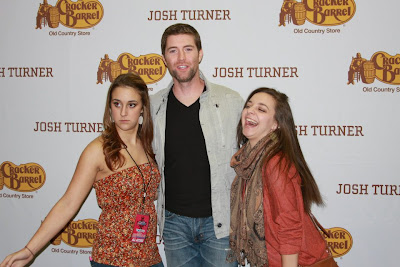 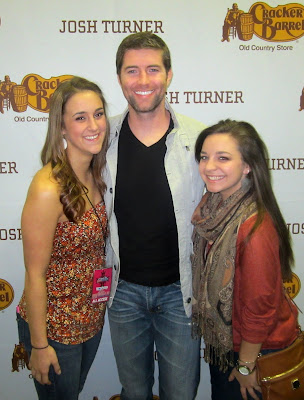 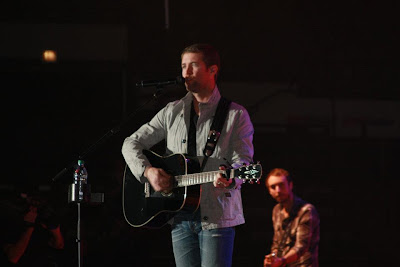 What a beautiful man Josh Turner is.... when you're looking at him, anyway. He couldn't do a radio interview [stupid] and then didn't do much talking at all during his meet and greet. I tried to loosen him up with a beer, and I even dry humped him!, and as you can see in the mid-hump picture, he was not too thrilled with anyone interrupting his smile. LAME. I hate when celebs ruin your perception of them.

Basically, it was a fabulous day, and it gave me an excuse to wear my cowboy boots again! I also got to wear a tube top in January. That was weird. [BTDubs, it's from Kohl's clearance and I kinda love it.]

love,
elizabethany
EDIT: I received an email correcting me about this post and the things I said about Josh Turner. Be sure to check that out in the comments section below [or by clicking the title of this post!]

I received this email from Michael and told him that I would pass it along for *clarification.*

First saw your tweet about Winterblast and then read your blog. You must not do research on the artists that you are privileged to get VIP passes for, but maybe that's because you work at a pop radio station and not at a country station. You probably embarrassed Josh Turner with your antics, and all of his interviews for radio stations are arranged ahead of time. He had over 100 people to meet and greet that night, so he couldn't spend a lot of time just entertaining you. He is a very devout Christian man, is happily married with 3 little boys under the age of 6, doesn't DRINK or smoke or do drugs and doesn't flirt or kid around with female meet and greeters. He is not all about HIS SMILE and it's too bad you took your inability to hang all over the man as a reason to be nasty in your blog. You come across as a self-centered, stupid, horny, immature brat to me. That may work on some people, or celebrities, but you'll end up on everyone's black list if you keep it up. We got your name and your pics - list has already started Miss Elizabethany and I may even be contacting your station's GM to let him know of our disgust with your behavior and blog.

As always, this post was simply telling my story and experience. I'm certainly not a know-it-all, nor do I claim to be about country music artists, but I'm also not sorry for dry humping him. I provide entertainment, and that's what I did.

Reading all of this, here is my two cents.

The dry humping (of course, if one saw the video, it would be a bit better) could be taken as going too far. I get where the person that commented is coming from.

Was the radio station involved in this concert? If so, EB has a right to be upset about the artist not taking 5 minutes to have a conversation. I have followed radio for a long time, and meet and greets, which is what this appears to be, allows the sponsor to sit one on one with the artist for a few minutes and then the artist fulfills the obligation of the meet and greet.

EB is not what the opinion says. If you have followed her long enough, you would realize she works her ass off in an industry that is not guaranteed. One doesn't move from a sub-200 market to a top 50 market in less than 2 years without a lot of hard work. She isn't even 30 ready, and is that high up the radio chain. That is saying something.

Maybe the person that wrote the opinion should do their own fact checking before attacking the blogger.