Tweet Okay so maybe this only "includes me" if you know me or know the competition, but that means you!

Time made a top ten list for literally everything under the sun... Including Top Ten Twitter Moments of 2010. [Woah. I know I love alliteration, but damn...] 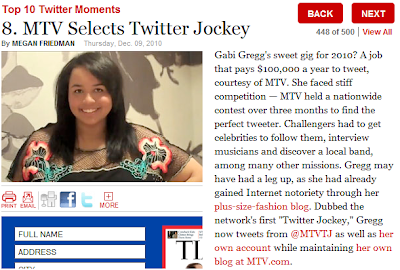 No joke, I teared up a bit when I saw this. Sure, it has no mention of me, but that's not the point. I'm happy where I am now. It's the fact that I was a part of this thing that they're saying is the #8 thing to happen on this year's biggest social media platform.

And who beat us? People like Kanye West, Conan O'Brien, Justin Bieber, and freakin' Twitter.com itself. I'd say considering who we're up against, #8 is pretty damn good.

Thank you, Time Magazine, for realizing what a groundbreaking competition that was.. And of course thanks to MTV.

Posted by elizabethany at 3:10 PM