on the racks: bret michaels bares it all [almost] for billboard

Tweet It must be the kind of day where old-school musicians feel like being naked on my blog... Not that it's a regular occurrence or anything....

Not only is Seal gettin' jiggy with Heidi in his new music video, but now Bret Michaels is showing you everything but his goods on the cover of Billboard. 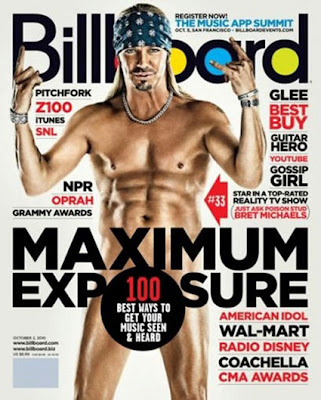 Their Maximum Exposure issue compiles a list of celebs who are accelerating their career in various ways. Bret Michaels is #30 thanks to cable TV- Rock of Love, winning The Apprentice, and now his new VH1 show- Life As I Know It.

"TV has absolutely made my sales go up, made my tour guarantees go up. TV has been a great addition to my career. But the key thing is knowing what to walk away from. I advise anyone-especially musicians-to be very careful not to just grab anything they throw your way."
-Bret, on how TV has affected his career.

Apparently he was also really close to being an Idol judge. He said he was in the "final four" and even in talks with being a judge on X-Factor. For some reason, he settled for his own show on VH1 that will probably make everyone roll their eyes, but still watch.

My question is: Is the cover too much for you?! Are you covering your eyes or wanting to take that oh-so-convenient circle away?!