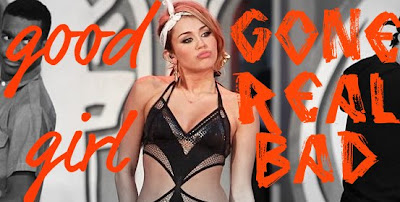 TweetEveryone should know I'm a big fan of Miley, but all this becoming uber-slut so soon thing is not okay with me.

Whether she likes it or not, she started on the Disney Channel, and she needs to respect her younger fans. Instead, she's taking a role in a movie that is a bit controversial, to say the least.

Apparently Lola [AKA Miley] loses her virginity, smokes pot, gets wasted, kisses girls on the lips, and shows her mom Ana, played by actress Demi Moore, her Brazilian wax in her new movie "LOL: Laughing Out Loud."

"The film focuses on communication gap between Lola and her mother, due to the increasing use of YouTube, iTunes and Facebook. Lola's mom, Anne, "accidentally" reads her teenage daughter's racy journal and dicovers Lola's wild ways."

It's supposed to debut next year, but expect lots of criticizing people. I'll probably be joining them.

What do you think?!

Please, Miley, for the love of all the little Disney lovin' girls out there, calm your ass down and ease into things, will ya?!