saying goodbye to oprah in 2011

I was wondering when this day would come, and I can honestly say it's probably sooner than I thought. 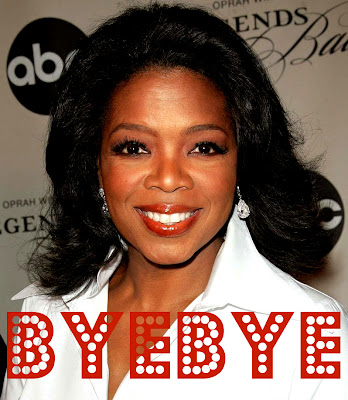 Oprah announced today that she won't be renewing her contract. Come September of 2011, the daily talk show will be history after 25 years.

"After much prayer and careful thought, I decided that next season, season 25 will be the last season. I love this show. This show has been my life and I love it enough to know when it's time to say goodbye.... These years with you, our viewers, have enriched my life beyond all measure. We've grown together. You've raised your families, had your children. And left a spot for me in the mornings or the afternoons. I want you all to know my relationship with you is one that I hold very dear."

Don't worry, though.. She's not disappearing completely. [How could she?!] She's working on her own network that will be called OWN [Oprah Winfrey Network, of course] that will be launched soon.

My girl Ellen of course said something on her show about it all...

“Right before I came out here, I got a call from Oprah and she told me that she is announcing that next year will be her last year. It will be her 25th year, and she feels like it’s time for her to stop. I don’t think I could be here without her. I think she has blazed a trail ... She is an amazing woman. She will always be the Queen of Daytime Television, and she also said she is leaving me all of her money. I was like, thanks Oprah, thank you.”

As much as I'm an anti-fan of Oprah and her show, Ellen, as usual, has helped me see some good in her again. So let's all cheers to Oprah and her final two seasons of her show! [I can't even imagine the amount of attention she'll get when nearing the end.]

Posted by elizabethany at 2:34 PM