on the racks: sexiest man alive

It's official! Johnny Depp is the "Sexiest Man Alive" according to People Magazine. 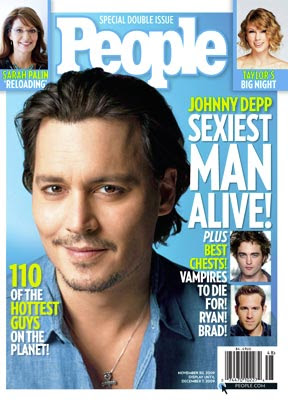 This is his second time hitting the cover of this issue! Only George Clooney and Brad Pitt have done it before him.

I'm confused. I have, several times, tried to look at this man and convince myself that he's sexy. I just can't do it.

So he's mysterious, wears eyeliner, is a pirate, has tattoos, is the dark eyed-dark haired stud that women long for.... I'm not seeing it. I have as much attraction to him as I do Jon Gosselin.

I was looking through the slideshow of the other guys who were "runners-up" to try and prove to myself he was in fact the sexiest man alive, but I still can't do it.

I seriously want to jump the bones of every single one of those guys right now. How are none of them on the cover?!

Someone please give me a reason to think Johnny Depp is hott. I swear I'm trying. It's impossible so far.

Also, let me know... Am I basically lesbian for not agreeing with this decision?!