on the racks: chelsea handler does playboy

Part of me was shocked when I saw who would be the holiday cover of Playboy, and the other part of me remembers her book all about one night stands. [The only book that I have ever read front to back, without skipping a single word, and what I plan on using as a model for the book I shall write later in life.]

Who's it going to be? My second favorite funny woman Chelsea Handler! 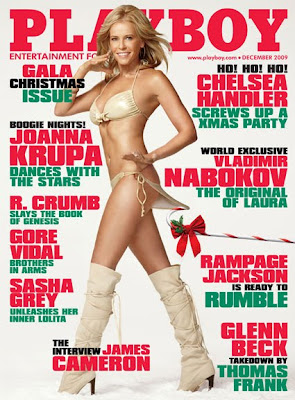 She looks SMOKIN'!! I'm sure there was a ton of Photoshopping done, but who cares?! All that matters is that it looks good!

They're calling the article "Chelsea Handler's Guide to the Holidays."

She talks about hooking up at office parties:

If you drink so much that it seems a good idea to hook up with one of your co-workers, try to do it somewhere a little less public, like a car. We have an official Chelsea Lately El Camino that we use for just such an emergency. If I notice a pair of drunken employees getting a little too frisky with each other, I'll throw them the El Camino keys and guide them toward the parking lot. If you're going to make a mistake you'll regret tomorrow, you may as well do it somewhere classy.

And dealing with her family:

My father has absolutely no social decorum at Christmas meals. He's usually the first to start eating, hoarding the food like he's preparing for a famine. And watching him eat is like watching a dryer on the spin cycle....Oh, and he also likes to urinate over our balcony. That's not something you want other people to witness, especially people who aren't directly related to you.

And a bunch more... Like what she thinks is the real reason for the season. 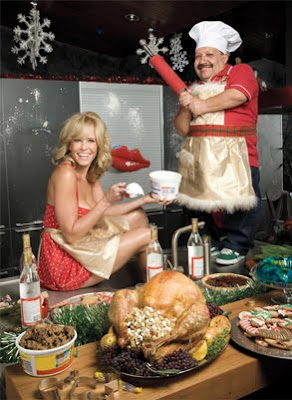 Ya know, I watch her show, and I think it's funny and all... But when I read things she says, I can't stop myself from LOLing. I need to get this Playboy in my stocking. Along with O when Ellen is on the cover. Kthanks, Santa.

Also, please tell me Chuy will be involved in plenty of these pictures. I will pee my pants in excitement.