A couple years back VH1 stopped doing their "Divas" concert that featured "some of pop music’s most talented female artists." This year, they're back to do it again.

They have picked 4 of today's most popular and talented female artists to star in the concert... Or so they say.

Who have they picked? Adele, Leona Lewis, Kelly Clarkson and Miley Cyrus. 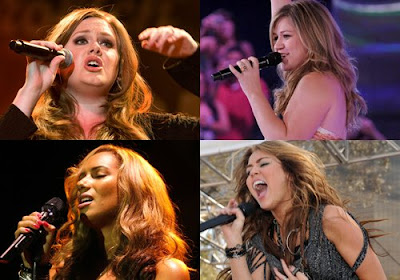 Uhh.. WHAT?!?! Sure, everyone thinks Adele is talented, and Miley is running the teeny bopper charts, but are these 4 really the divas of right now?!

In the past it's been people like Beyonce, Diana Ross, Tina Turner, Cher, Mariah Carey, Aretha Franklin, Mary J. Blige, and Shania Twain. Does Leona Lewis' 2-hit-wonder really match up? What about Adele's not-so-famous-in-the-US self? Does she?

Don't even get me started on Miley's childish self. Kelly- I love her... But she won Idol 6 seasons ago. She's no longer the most popular one.

VH1 is just plain stupid nowadays. Their shows are stupid. They pick stupid people to be divas. And they only have ridiculously stupid people on all of their programming.

Congratulations, VH1. You suck at life.