Before I get this post started, can we just all let out a big HELL FREAKIN' YES because it's really almost football season?!? Oh my gracious I am just so piss-my-pants excited it's awesome.

Anyways, football season= elizabethany's football talk. [Mostly geared towards the Redskins/NFC East/Mountaineers/Big East, for all of you newcomers..] 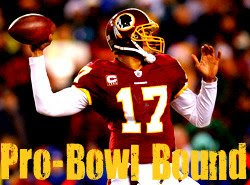 Mr. Joe Theismann, one of the 'Skins' greatest, was quoted talking about Jason Campbell on Sirius Radio Wednesday night and it was all good things.

Not only did he mention the obvious fact that Campbell will finally have the opportunity to grow this year thanks to having the same offense for the second time in 8 or 9 years, but he made a bold statement: Jason Campbell is headed for the Pro Bowl.

"Last year, Jim Zorn rebuilt his throwing style. He's got great size, he's got a great arm, he's got a terrific work ethic. I think that this young man -- and he's in the last year of a contract, so there's super motivation there -- but I think he's going to have a football team around him that will be a much better football team than it was a year ago."

They also talked about how the Redskins are flying under the radar right now, and could definitely make it far this season.

I hate when people say that. We always seem to do the opposite of what people think beforehand, and what we do to start off the season. [They're saying we could go 4-0 to start off...]

All I'm sayin' is, I'd rather not have to drop the "There's always next year" this time after losing a playoff game.

PS: Random sidenote. My brother received an autographed picture of Chris Cooley, and a bunch of bumper stickers etc. and a note saying "Congratulations on being a high school graduate and thanks for always being a loyal fan." Apparently you can send those things to people. I want one, man!
Posted by elizabethany at 12:03 PM

You're my new favorite. Why are we not bff?