a tragic week in hollywood

I don't even know where to start or where to take this.

There's no point in telling what happened, you already know.

When Ed McMahon died, I was going to do a post, but then I figured everyone knows the tragedy, why reiterate it?

When Farrah Fawcett died, I thought "I don't know how I would post about this."

Now that Michael Jackson died too, I'm just at a loss for words, and really upset.

It's true what they say, people. Things come in 3's.

I want to honor all of these people, but I just don't know how besides keeping them on my mind, which won't be hard.

There are two things that not everyone knows about, though. Both relating to the King of Pop, and both terrible things that should have never been done.

First, Perez Hilton posted this on his blog: 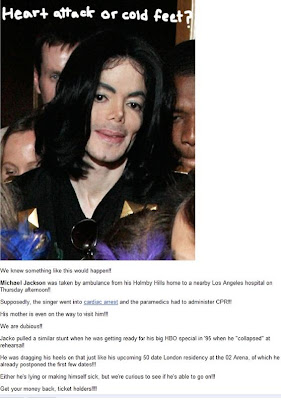 Who the H does this guy think he is?!?! NO WONDER he got punched in the face this week! I don't care how much you think someone may be faking something or how weird they are, you never, ever express that in this way. Especially when their father had just released that he was "NOT OK."

Perez has gone from hero to zero in just a couple of days.

Also, Entertainment Tonight posted a picture that should never be shared. You probably don't want to see this, but your curious side will. It's a picture of Jacko in the ambulance on the way to the hospital as the EMT workers are trying to revive him.

I can't believe it. The things people are leaking these days are absolutely terrible.

There are a couple more things I want to share, but I shall add those tomorrow. I just wanted to say Rest In Peace to these 3 amazing, American icons, and shame on you to Perez and ET.

Uh... you say the photo that ET released should never have been leaked. Yet you post it on your blog? That makes sense...
AND I don't blame Perez for what he posted. MJ was a wacko who molested children. I don't respect him either.