Have you ever wondered what the H happened to Ryan Cabrera? Ya know, Ashlee Simpson's ex-BFF and boyfriend, turned one hit wonder? [Okay fine.. 2 hit wonder.]

He randomly appeared in one of my friends' pictures recently, and now he's on the Sam's Club Website... As an item to purchase. 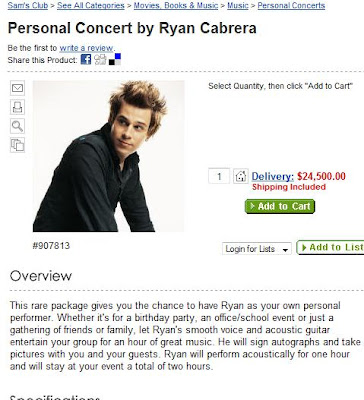 The specifications section is the best:

Oh Ryan Cabrera.. Your time is up, I'm sorry. I enjoyed you while you lasted, but your hair has gone on for far too long. I hope you have fun with the Sam's Club customers. [Who for some reason would pay over 24k for you...?!]