photo diary: my trip to portland and seattle

I don't know why I always wait til this late in the Fall season to go on my "big trip." It's cold and there's less daylight... but I did it again.

This time, I called upon the BFF to help me through rough times and escape for a few days to uncharted territory in my life: The Northwest. I told myself it wouldn't be that cold. I believed that 50 degrees as a high was just jacket weather. Once again, like last year's trip to Europe, I was way under-prepared for mostly 30-something degree wet weather.

We didn't really know anyone there and everything I found was like "try this beer" or "you've gotta eat this." So that's what we did. We drank and we ate, and stumbled around the city. [Hey, we were doing the buddy system so it's totally okay, Mom!] There are MULTIPLE breweries on every block it seems, and we tried to go to as many as possible but I'm going to blame the altitude and the higher ABV percentage on our relatively early night. [Don't you look at me like that.]

On Saturday, we got to walk through the Saturday Market which helped me pick up some Christmas gifts for myself, and then Powell's Books which I figured would not be for me, a girl who doesn't read.... but they had some fun journal-style books that I've been wanting to check out. YAY for a daily journal that only makes me write one line a day!

When you walk everywhere, even if it's a couple miles away, you stumble across things you may not have found otherwise. I spent a solid 20+ minutes on this bridge just taking pictures of a park. [I love a good park in the city.] 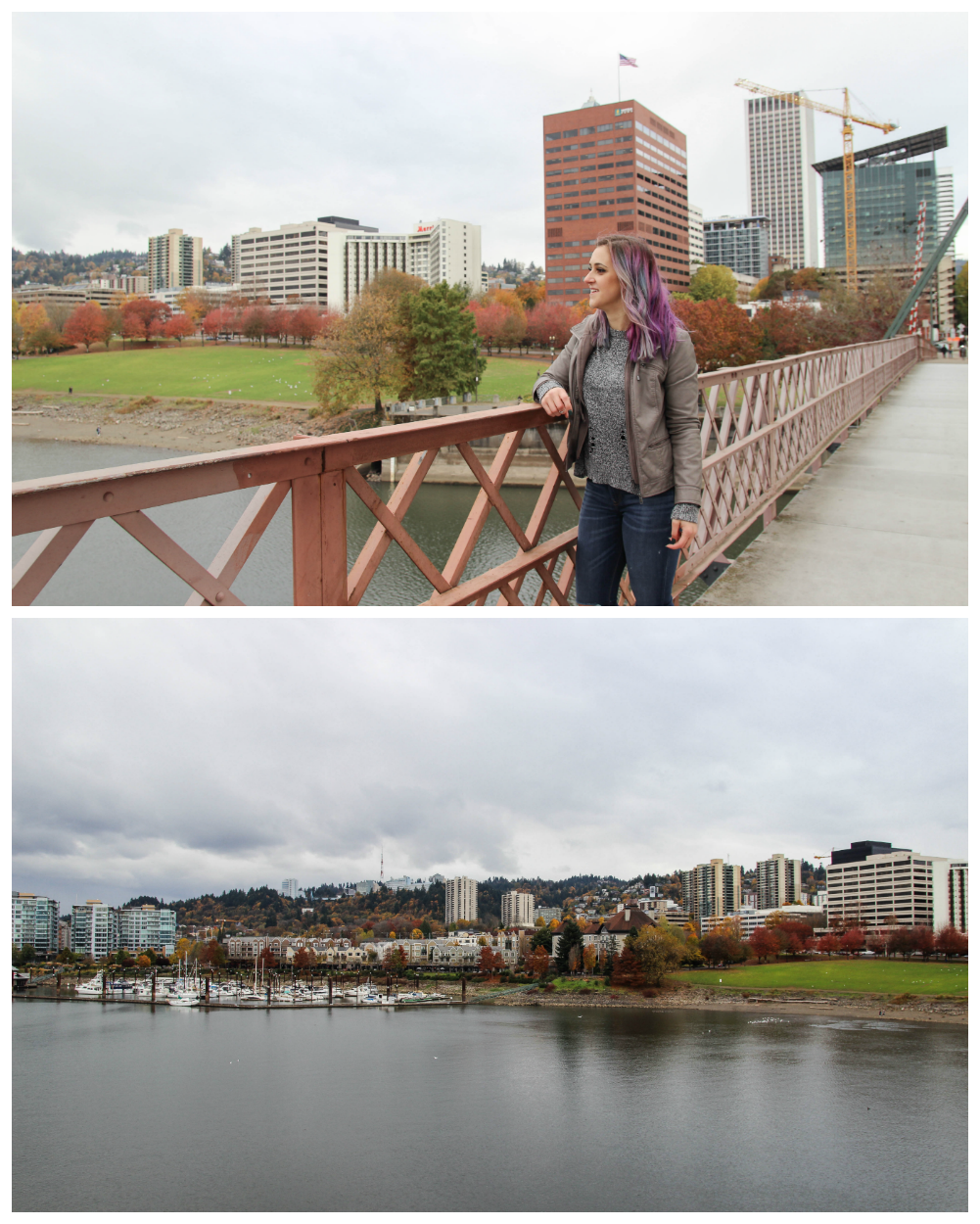 Pinterest helped me find a bunch of "Insta-Worthy Spot in Portland," so we looked for a few of those. Including a fountain park [that ended up having zero water working at the time] and the smallest park in the world- Mills End Park. Really- it's just a plant in the middle of the road as if that's a safe place for humans to hang out in. 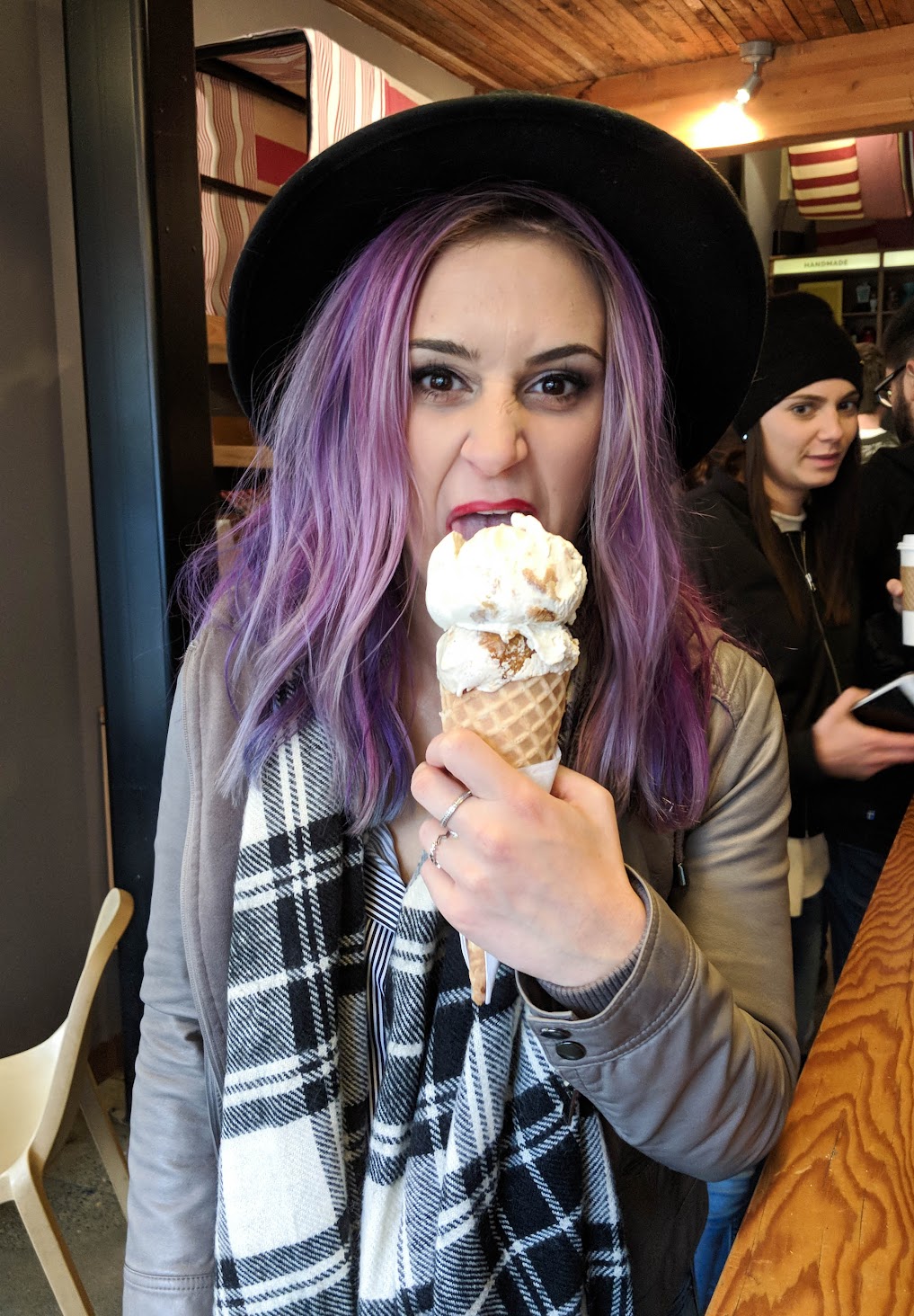 Thanks to Facebook friends, I was told about Salt and Straw, an ice cream place with seriously unique flavors. We're talking Thanksgiving Turkey and cranberry-apple stuffing flavors [which I'm eating over there], plus olive oil, basil, mashed potatoes and more that you can see in the menu below. Luckily they let you taste everything and it was FANTASTIC. The BFF loved the mashed potatoes and olive oil flavors, and I was shocked to be ordering the turkey that tasted like a salty maple syrup of sorts. If you go to Portland, skip the Voodoo Doughnuts and check this out instead. There will likely be a line, but it's more unique than the semi- decent doughnuts.

As for other Portland food options, make sure you check out one of the food cart areas [lots of Greek and Asian food, but so good!] and don't think it's weird to eat at a brewery.

Portland has all sorts of places for #views, but if you want all of it, the five minute aerial tram is lovely. 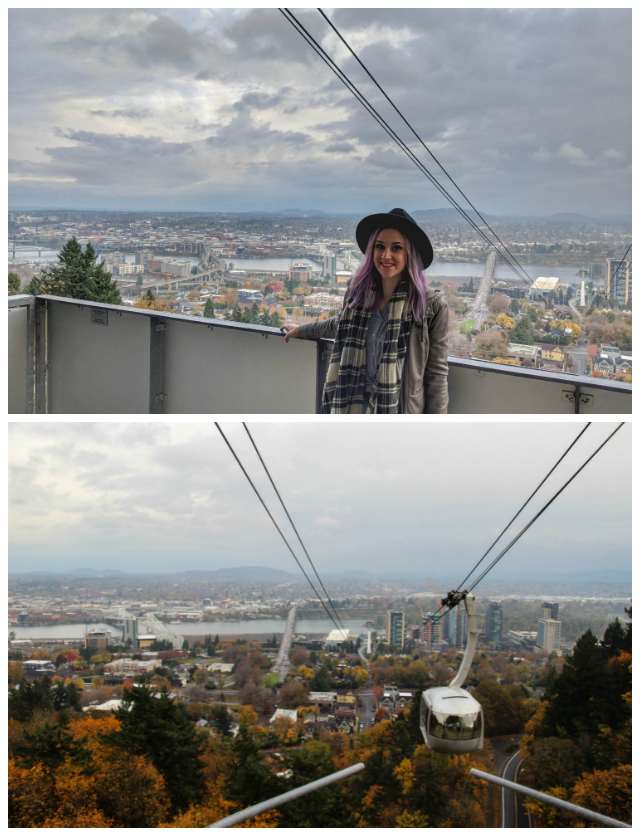 After a solid 40 hours in Portland, it was off to Seattle. Renting a car was only about $30 for the day, which is cheaper than most Uber rides to downtown. There are SO many places I wish we could have stopped at along the way, but we were antsy and low on time in each city. Plus- when it's cold and rainy- hiking to a waterfall isn't high on my want to do list.

Seattle came with a tour guide for us- one of my closest high school friends. He helped us feel a little like a local [which is one of my favorite things to do/feel when visiting a city] then we hit the things Pinterest and Facebook told me to. After proudly cheering on my Redskins to a victory in their city, we did some bar hopping.

One of my favorite things about Portland and Seattle [and really a lot of other cities outside of DC in general] is how much character all the bars have. There's something about the decor that always makes me amazed, even if it's a local sports bar.

One of the most beautiful bars I've ever stepped foot in was in Seattle, though. Someone told me about it on Facebook and my friend said it's normally dead unless it's late on a weekend night. That was perfect. I had all of the room to take all of the pictures of Unicorn.

Speaking of drinks, I had also read about a place called Canon, which was tagged with all sorts of Insta-worthy drinks on Instagram so duh, had to go there. Why would anyone travel without planning everything around their Instagram pics?!

Turns out, you need a reservation just to try out their $18 drinks... but LOOK AT THESE THINGS.


Then it was all about the touristy things. Luckily, most of them are really close together in Seattle and we did a lot of walking [and commenting about how rough it was to walk in the cold mountains].

Let's first acknowledge the most beautiful wall to ever exist.. at the Museum of Pop Culture. It's right next to the Space Needle and I saw someone with a perfect picture/reflection and wanted to recreate it, but instead took a couple dozen tries of different angles. 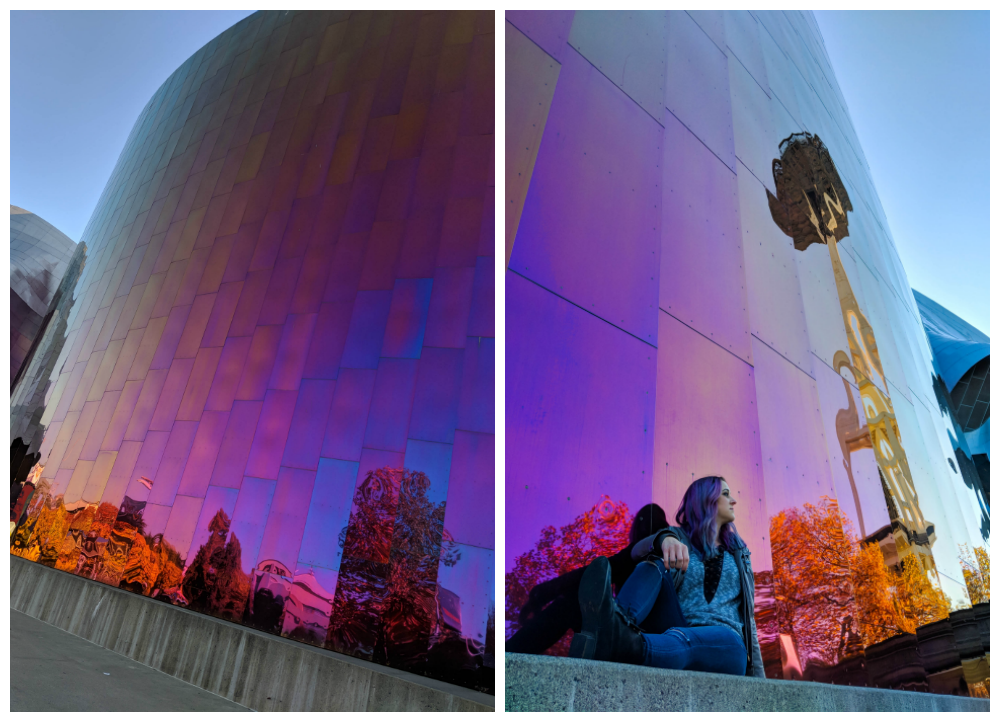 The rest I'm sure you've heard of or seen plenty of so I'll do what everyone wants: Less words, more pictures.

We drank a lot of Rainier beer and heard all about the mountain, but hadn't had clear enough weather to see it. I'm so glad I went on the morning walk before my flight. I walked down Pier 66 and saw it reaching over the stadiums and up to the clouds and just like everyone says- no picture truly captures what your eyeball sees. 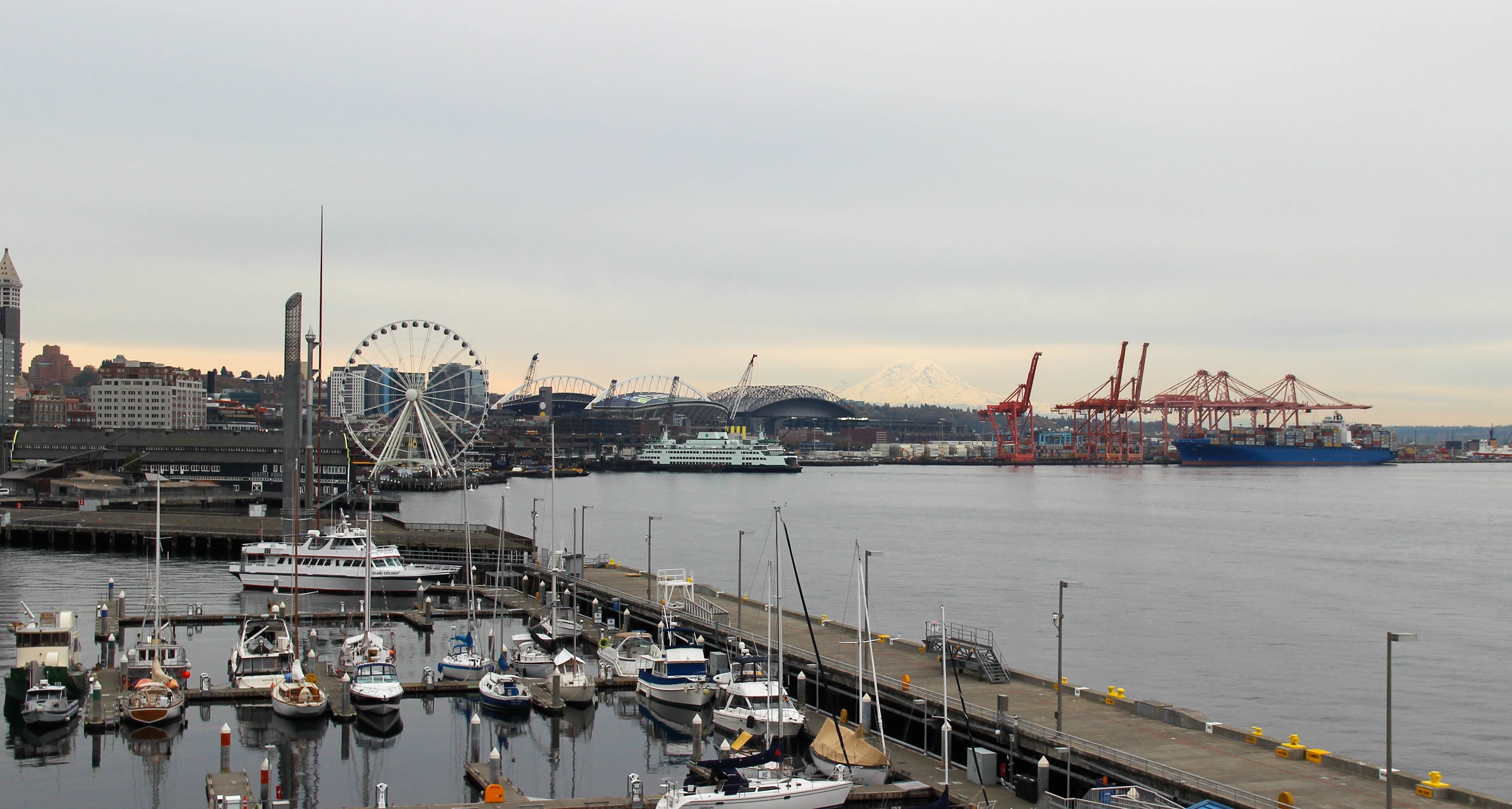 There were also some pretty incredible views on the way home.. which ALMOST makes the fact that you're going home a little better. 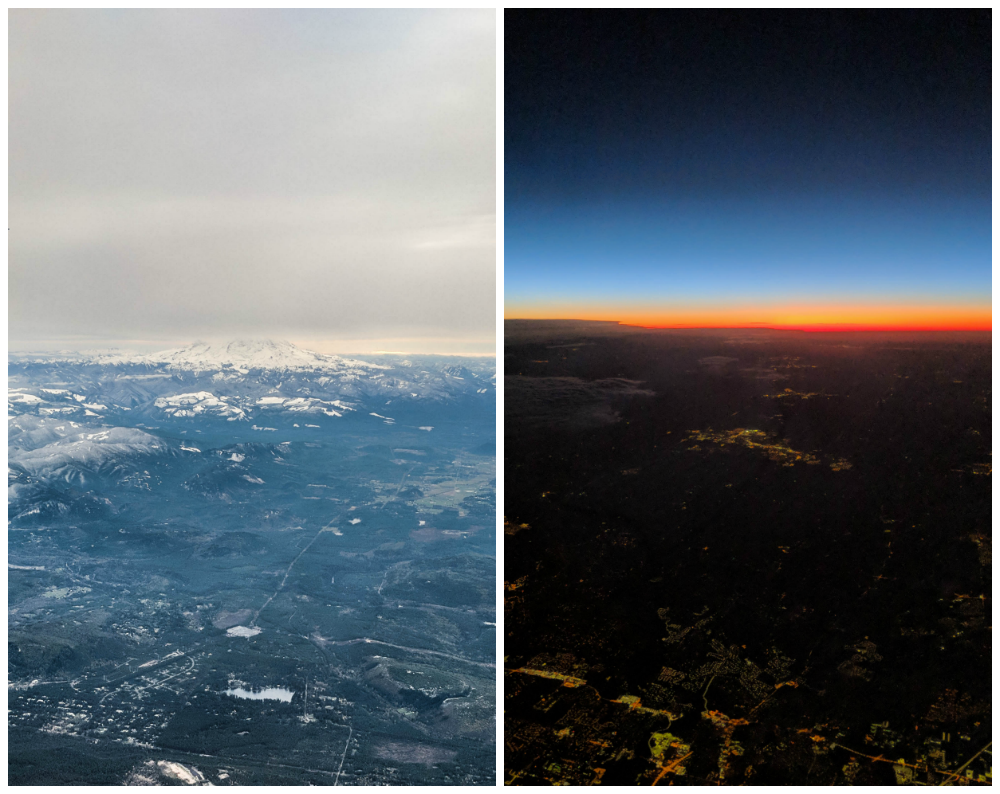 In review, in case you're looking to make this mini road trip that's less than three hours between the cities.. [As always, I recommend flagging places that you've seen or been given as recommendations so it's easy to figure out the closest and also the best routes.] 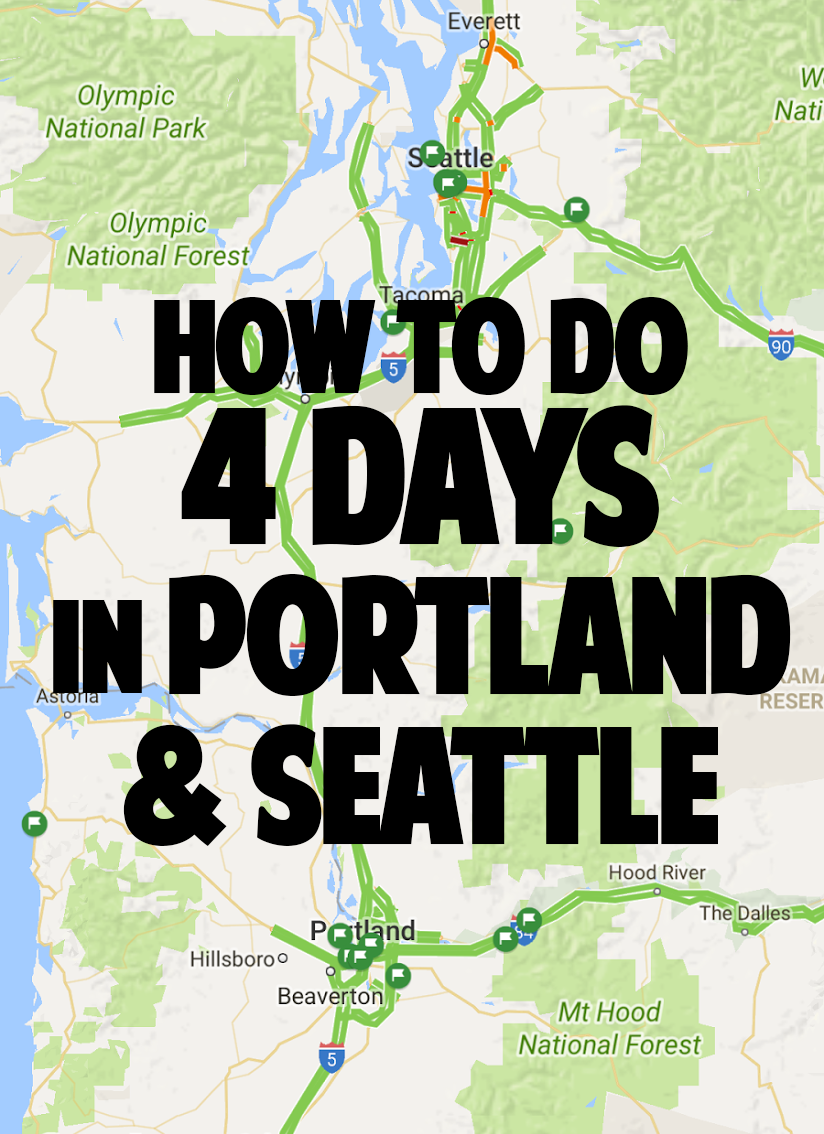 THINGS I WISH I DID INBETWEEN: [We wanted a straight shot drive, but if you can take a day to drive, do these things]

I love your hair colour! Your trip to Portland and Seattle sounds like fun - and different! I've never been there. Your photographs are great! I love the pic of you on the Fremont Troll and love the helpful itinerary you made for your blog readers on their visits there!