elizabethanytv: the scariest moment of my life with vw's rallycross team

Volkswagen and me: We go together pretty well. I grew up on them, I raced them, and then I bought my dream one a year ago. My friend Patrick knew this about me, and since he works at VW, he gave me some pretty awesome opportunities.

Some of them were with the Volkswagen Andretti Rallycross racers champs, Tanner Foust and Scott Speed. It's actually a pretty big deal [which I found out once I started telling some friends and they were unexpectedly excited for me]. I was just excited to play some Minute to Win It games and talk ish to some racers.

A dozen oranges, a box of cookies, a cheating attempt, and a very messy face later- we got the ultimate loser.

...but I'm embarrassed that I can't even try and cheat [during the cups game] and win. Idiot Elizabethany.

The day after filming this, they invited me to do a HOT lap with Tanner Foust, which promptly made my dad and a lot of my Snapchatters very jealous. I was pumped to go around the track twice in this car that drifts and goes over jumps. Fear wasn't really a factor; I knew I'd be safe. I mean, they strapped and buckled my helmet to the back of the seat and everything.

Then, we took off. We hit 130 mph as we went straight for a sharp turn.

I. WAS. F#@%ING TERRIFIED. I tried to open my eyes. I tried to laugh off the terror. I tried to hold on, but there was nothing to grab. I accepted the fact that at least if we flip and crash, I'll be totally safe in here.

Luckily, they caught it on video. Be sure to catch the moments of my eyes being ALL THE WAY OPEN.

Seriously, it was the scariest and coolest thing I think I've ever done... and I'd like to think I try a lot.

When I went to the race, I took my very excited dad. I don't think I've ever seen him walk with such a pep in his step, and he's definitely never brought up getting a picture with someone like he did Tanner and Scott. 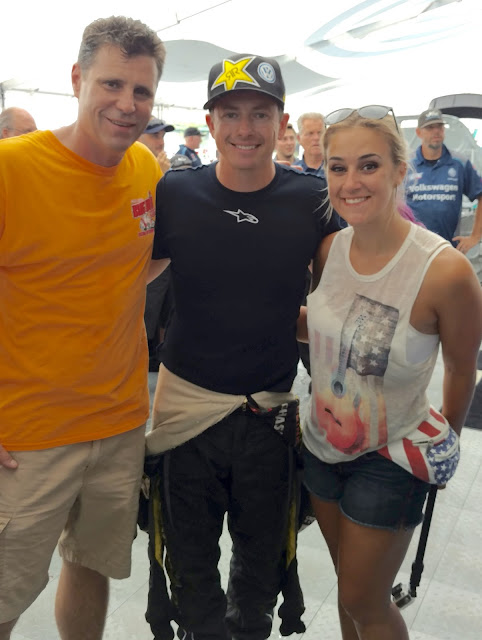 We were able to watch some of the other rounds with the guys, which was super neat to see the comments they had to say to each other, and celebrated as Scott took 1st and Tanner slid in front to get 3rd in the finals! WOO! Papa Plog did point out that I appeared to have PTSD, though. As the cars raced around, I was feeling some intense emotions and flashbacks to the ride!

Now I will watch who I throw out my "former racer" credentials to, though.....

PS here's a good look at the whole race event at RFK!

Volkswagen is the best car in the world! I congratulate you. German technology never fails. If you have a mobile application, you can buy android app reviews and succeed. In our time, it's hard to get over the fact that you immediately learned about the mobile application, so there are helpers who help out your application in the TOP.