nifty: the shitten is the new way to wipe

It's been a while since a product has literally left me speechless or just straight up shocked, but the whole existence of this one is just.... wow. 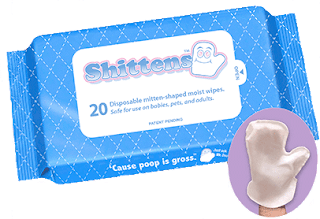 The Shitten... it's a wet, disposable mitten... that you wipe your ass with... so you "don't get caught brown-handed."

First of all, if you're getting poop on your hands when wiping, you're doing something wrong. Consult your parents, and yell at them for potty training you like that.


Now, if you really think this is something you can't get over... I guess you could consult the Shitten.


Of course they have Jenny McCarthy on the website saying they're awesome.... I don't even wanna imagine her trying to remove these damn things after she's used them though.

Seriously.. what in the eff is this?! Don't get it. Like ever... Unless you're using it as an extra protectant while changing a babies diaper... but I'll still judge you.