on the racks: justin timberlake talks britney and jessica in vanity fair

I haven't been able to decide how I feel about Justin Timberlake these days. He's hilarious on SNL, was great in "The Social Network," but I don't think I like him as a person.

Him being in Vanity Fair this month didn't help me decide, but he did have some interesting things to say about his exes. 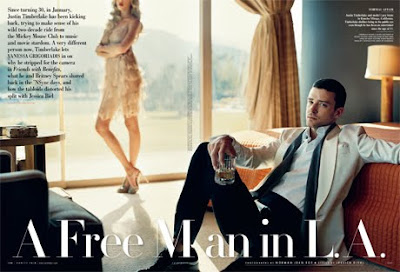 “She is the single-handedly most significant person in my life. In my 30 years, she is the most special person, O.K.? … I don’t want to say much more, because I have to protect things that are dear to me—for instance, her.”

“I wish her the best—that goes without saying. We haven’t spoken in 9 or 10 years. We were two birds of the same feather—small-town kids, doing the same thing. But then you become adults, and the way you were as kids doesn’t make any sense. I won’t speak on her, but at least for me, I was a totally different person. I just don’t think we were normal; there was nothing normal about our existence. We spent way too much time being the biggest thing for teenyboppers.”

On being awesome at a young age-

“It was exciting that we were having so much success and we could do whatever we wanted. And I mean that about everybody: Backstreet Boys, ’NSync, Britney, Christina. At that time, we could literally go, ‘Oh, man, let’s go to Bali,’ and we’d be on a plane to Bali. We were little kids with big toys. You do the math—that’s not going to last. Ryan [Gosling] and I used to steal golf carts and go driving in the middle of the park to get milk shakes, and we never got in trouble for it. We thought we were big shit.”

He doesn't exactly come off as a huge a-hole or d-bag, but he's not the coolest person either, am I right?

I miss the old JT... but at least he recognizes he has changed. And I think it's obvious in every aspect that J-Biel is to blame.