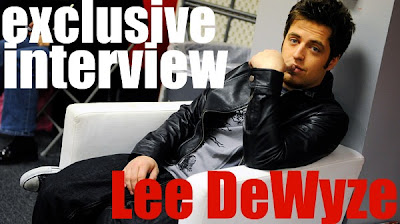 My first ever celeb interview was David Cook, two years ago, after he won American Idol [woah, I don't like listening to that again. Good thing I'm getting better!], and now I got the chance to interview THE American Idol again!

Lee DeWyze was in town for a free show as part of "The Big Event," which is when students help out all over town and just give back to the community. 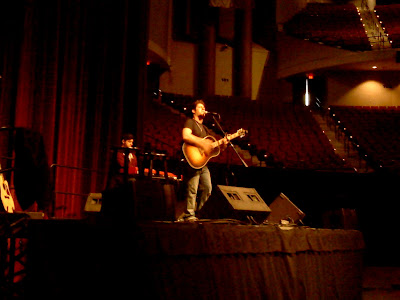 I showed up an hour and a half ahead of show time, watched some soundcheck, watched the stampede of high school girls when they opened the doors into the arena, then headed to the green room to talk to the Idol himself.

He was exactly as I imagined him to be. He's not a huge BURST of energy, but he was really chill, nice, and honest... And was rather obsessed with making sure he looked okay before heading out on stage. [He kept changing shirts and everything! Apparently people actually comment on him wearing the same outfit multiple times... DANG!]

I expected him to not be able to tell me his favorite Idol, but it didn't take him long to spit it out: Casey Abrams. As for "having the pipes", he seems to think Pia has what it takes.

It's interesting to hear from him exactly how many changes have gone down on the show! It needed to happen, though... As much as I hate to say it, his season was pretty rough.

As for his show- I was a fan before, but he made me immediately get his full album. His voice is so easy to listen to and his lyrics talked to me big time. It was like he was reading my mind with his song choices! I've always loved "Sweet Serendipity," but I think "Live It Up," the title track for the album, is my new favorite.

"You've only got one life, one life to live
I wanna give it everything I got
Who knows this might be it for us
So why don't we
Live it up, Live it up darlin'
or Give it up
My heart is starvin'
Live it up, or Give it up"

So definitely give his songs/album a listen. I wouldn't steer you wrong. I never have, right?!
And thanks to Lee and all of his crazy amazing fans!

Great to hear he is making new fans. His album is fabulous as are his live performances. And yes, people notice that he wears the same clothes...And they complain if he wears a hat!!

Great interview! Thank you! I dont know how you maintain composure speaking with him for that long, being a fan, my mind would go completely blank! Thank you for the positive feedback! Lee is amazing!