exclusive interview: jonny moseley from skating with the stars and mtv's challenges 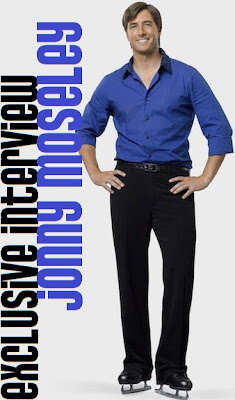 Tweet Dancing With the Stars is about to get better- by adding skates.

You might know him from the 1998 Olympics where he won the gold medal for skiing. You probably saw him host 3 of the Real World/Road Rules Challenges before TJ Lavin took over.

I had to ask him the obvious questions: Who his biggest competition is, what kind of tricks we can expect, and how hard it will be. I also asked who might be the Bristol Palin of the show.

Surprisingly, his answer was HIMSELF!

I also had to ask him about the Challenges and what he misses most. One thing he had to say:

"I miss it. I kinda made a rash decision. I was a TV rookie and kind of got bored of standing around all day waiting for them to do the challenges, but turns out that's what TV is."

He also said why he wishes he was still involved, but for all the answers, you're going to have to listen to the full interview:

He was easily one of my favorite people to interview... Ever. We really vibed right off the bat, which you could tell kinda caught me off guard at first, but he's a really down to Earth guy which makes an interview go a lot better.

Be ready to watch the show Monday! I'm excited to see what kinda hurt they put themselves through. This isn't dancing... this is SKATING.

And maybe, just maybe, if TJ Lavin can't come back to the Challenge, maybe Jonny can come back into our lives.

Posted by elizabethany at 4:58 PM