because you care: the 2010 american music awards [with videos] 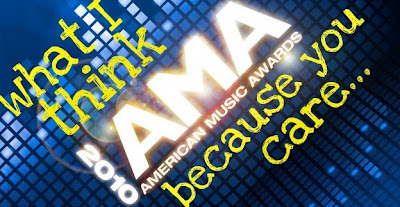 Tweet The 2010 American Music Awards were last night and I tried not to tweet too much so that I could share it all here, but based on my followers dropping like flies, I'd say I failed in that mission.

Oh well. I don't care! And I'm still going to share everything that I think is worth your time [as quickly as possible] right now.

First of all- Mike Manning, from Real World DC, hosted part of the Coca Cola Red Carpet! It was on Ustream so I don't have a video, but I gotta congratulate him! SO pumped he's making a GOOD name for himself after the show!

Now, onto the show-

When it opened and she was singing "Love the Way You Lie Part 2," I got excited. I thought she was going to put on a killer performance. Then, she started "singing" more. She reminded me of Britney Spears at the 2007 VMA's. It was disconnected and rather effortless... completely disappointing.

Enrique Iglesias and Pitbull took the stage after an awesome intro from Rico Rodriguez and Eric Stonestreet from Modern Family, but I'll be honest- it's not worth your time. It wasn't anything worth talking about.

Miley Cyrus was right after him with "Forgiveness and Love" and I think she's the one performance I'm not sure how I feel about it. It wasn't OMG SO GREAT, but the lyrics were pretty good. A little pitchy, but who wasn't last night? At least she wasn't pole dancing or ripping her [emo-styled] clothes off.

Diddy/Dirty Money performed for some odd reason. I assume he forked out a ton of money to get on that stage to have everyone say "Who cares?" It's obvious the girls are just his sex slaves and know they can't make too much of themselves to take away from Diddy's shine. It's a shame, really. Dawn could do better than working for Diddy. Diddy can't put on a show like he used to. I won't waste your time with this train wreck.

Kid Rock has been performing his ass off at all of the recent awards shows, and a lot of people don't like it, but homeboy was the first one to take the stage and actually sound halfway decent. I don't care how much his music has changed and how "Country" he may be now, I didn't mind it.

I'm not feelin' the Black Eyed Peas' new song "The Time." I like the sampling, but it's just too much. They put on a good, outrageous show, but I still don't see it being something everyone remembers. You be the judge-

Katy Perry just not sing live. I loved the choir beginning [even though most people were pretty anti-it] and the fireworks were obviously pretty awesome, but she was not. Watch if you want to see the proof,

Willow Smith intoduced Justin Bieber from her tippy toes, and he as of this moment in the show, he was the best to take the stage [the only one who could argue would be Kid Rock, in my opinion]. He had a few pretty epic voice cracks, but it just added a little flavor!

Bon Jovi was a refreshing touch vocally, but ya gotta admit- it was like watching any of the past few Super Bowl halftimes. It was cool, but it wasn't nearly as epic as it could have been. Don't bother.

Pink had one of the best, if not the best, performances of the night. The girl is pregnant and rockin' a show hard core. The performers all around her were amazing! Just... watch it.

I love a good, fly Ne-Yo performance, and I even like his new song, but they're getting to be a little typical for me. Even though they practically had sex on my TV, I'd say skip it.

Do I need to comment on Taylor Swift? Besides her uber-straight hair and bangs, it was exactly what she's done every other time you've seen her sing live. It was off-key and boring.

Christina Aguilera showed her goodies that we've missed so dearly performed a song from Burlesque. She looked a little hefty if you ask me, but what can you expect from a girl who's coming back to the scene full forced?! Wait.. you mean.. she's supposed to be hott in such a movie?! Well, you tell me- Did she pull the performance off? I'd say if people are gonna give BritBrit a hard time about any of her performances, you can absolutely hark on Xtina, who didn't sing like we remember. She also didn't even look remotely attractive. [Audio is not right, but it's the best working that I could find.] 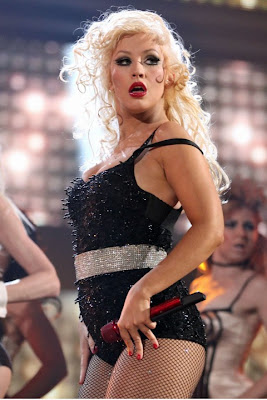 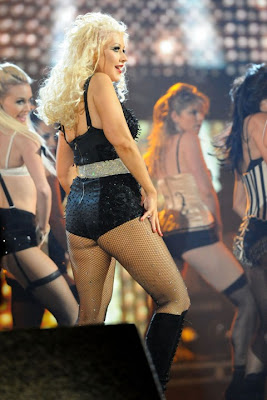 Time has changed our beloved Usher's live performances. Or maybe it's just the opposite. His performance wasn't much different than the one he did for the VMA's. His vocals were pretty shot, and it was obvious he's getting a little old and tired. I love him, but it's the facts of life- his "best performing artist" rep is dwindling. You can skip this one.

Train couldn't have looked happier to be on that stage. Lead singer Patrick couldn't stop smiling and DANG. Those glitter pants were something serious. Because it'll make you smile too, I say ya watch it-

Ke$ha started out very odd and auto-tuned, but I'm pretty sure she was singing throughout her performance. She definitely used a lot of back-up vocals, but you could hear her real voice, and it wasn't terrible! She's an interesting character with an interesting show, and a hilarious "auto-tune" machine at the beginning-

Gavin Rossdale and Santana were just plain boring, I'm sorry. My ADD couldn't watch the whole thing, so neither will you.


The closing performance: NKOTBSB- New Kids on the Block and Backstreet Boys

Epic. Epic, epic, epic. That actually doesn't even describe it. This performance made me cry real tears. They were by no means at the height of their talent, but like Toby Knapp said, nostalgia is a drug, and seeing two of the biggest boy bands on stage, together, singing their classic songs, and doing the typical boy band dances was something we haven't seen in much too long. Without this performance, the 2010 AMA's would have been forgettable. Now we'll remember it forever.


It was like they were trying to bring back a lot of things from the 90s, or maybe a lot of the 90s people we love are coming back on their own in a big way, and I loved the effort. Sadly, the performances weren't as good and the music just isn't the same as it was back then.

Thanks for trying, AMA's, but without that ending, it would have been remembered as "The American Pitchy-Music Awards."

Posted by elizabethany at 11:54 AM