on the racks: teen mom takes over

TweetIn case you haven't been the grocery store yet this week, I should warn you: Teen Mom is taking over. 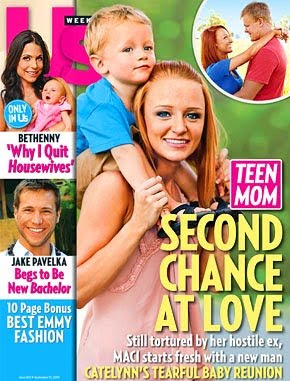 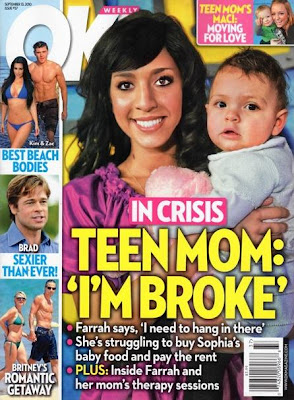 Maci and Bentley are looking super awesome on Us Weekly, while Farrah and Sophia are strugglin' on OK! Magazine... Literally.

Inside Us Weekly, Maci talks about her new "man" Kyle and how he's been really great with Bentley and their relationship. She says hes mature for his age and not afraid of taking on the "daddy role." Teen Mom producers even back her story!

There's also a little about Catelynn and when she got to see baby Carly again.

Farrah is broke. Real broke. Probably because she wrote off her only way of really surviving with a child and without any degree- her parents. It's nothing we didn't already know, but I guess being on the cover of a magazine will hopefully get her some extra cash and maybe a sugar daddy.

Maci is also mentioned in OK! [because she's the only smart, mature, cool one] and talks about her move to Nashville to be closer to Kyle.

If this, along with the Jersey Shore cast being the #1 Halloween costume this year, isn't a sign that MTV is coming back [even if it has nothing to do with music], I don't know what is.