poll: what do you think about the new barbie?

As I've probably mentioned a million times, I used to be quite the Barbie fanatic. So much of a super-fan that I played them until I was in 8th grade. [No! I wasn't alone! I totally played them with my neighbor BFF.]

Even though I don't play them anymore, I'm still a bit geeky for them. I love looking at all the new ones in the aisle, and it makes me cry that the Barbie aisle is slowly getting smaller and smaller.

Anyway, there's a new group of Barbies and they're apparently going Back to Basic... with little black dresses. 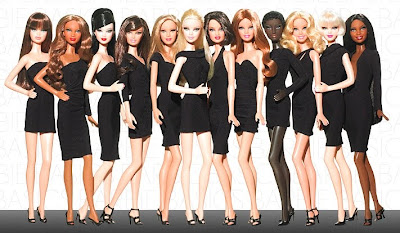 They hardly look basic to me, but I'll go with it. What I and the rest of the world is now questioning is the Barbie all the way to the right... and her cleavage. 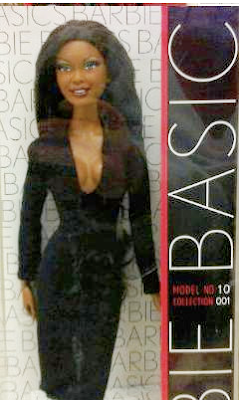 Part of me is like DAMN GIRL COVER YOUR STUFF!!!!

...Then I realize half of my Barbies never really had clothes on, so what's it matter?!

What do you think?! Is it inappropriate for little girls to be playing with Barbies who are showin' their goodies, or does it not matter?!

I really think I'm leaning towards it's not so good... But I want to hear your opinions before I make that official. [Yes, I am going to go with the popular opinion for once... Even if it's conservative. Crazy... I know.]