on the racks: tara reid does playboy

We've all been looking at pictures of Tara Reid for the past couple years and trying to hold back the vomit. Now, she's on the January/February cover of Playboy. 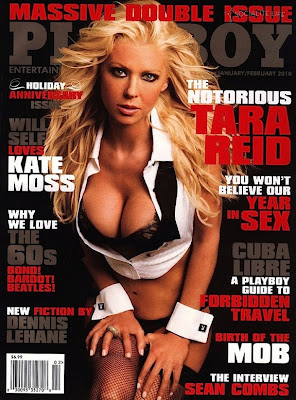 I'll be honest, she looks uber hott on that cover. Her knockers are rather gigantic, but she looks great, overall.

She says all the pictures that people have been seeing are old and before her body was fixed after bad plastic surgery....

“It wasn’t a good surgery, it happens sometimes. I got it fixed and now I’m OK, and I want people to know that I’m OK. I’ve been OK now for the last five or six years but people only show old pictures which is so unfair and that’s part of the reason why I did the Playboy shoot – to show the world this is me and this is what I look like.”

...Yeah, not buying that for a second. I'll say that she's been continuously looking better, but even in this interview the other day with WPIX she does not look like she used to in her prime.

She apparently posed topless, and maybe even naked, so I'll keep my eye out for the entire spread for you all. Until then, enjoy the tease that is the cover.