I've posted two songs from a group called Jada as part of Tunes on Tuesday. One is called "American Cowboy," which I LOVE, and the other is "Break Up Song," their latest single to hit iTunes. 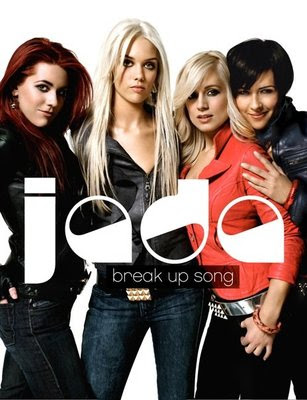 When I posted the songs, I knew nothing about them. When I received an email from someone who represents them at Universal/Motown Records, I knew I had to find out more before it was too late.

So, I talked to the girls, Jacyn, Elle, Lauren, and April, last night on the phone and recorded the whole thing for you guys. They explained to me why they each have ninja names, their relationship status [because let's face it guys... They're hott!], and tons more! Of course, I also asked them to give an elizabethany exclusive performance of their new single that is bound to be a hit!

They're singing ability is simply AMAZING. I am genuinely rooting for these girls and I can't wait until 2010 when they put out an entire album!

I also started a new thing: Eight questions with Elizabethany. I was trying to do it in Eighty seconds, but I think that'll be impossible. This is when it gets interesting:

The girls were TONS of fun to talk to, they seem very genuine, and did not hold back on anything. [It was definitely a relief because I took a long break from these interviews after David Cook..]

Basically, what I'm saying is... You all need to buy their singles on iTunes pronto. To any radio friends reading this: Their single is available for radio November 3. I think you should play it. At least give the listeners a chance to decide HOT or NOT!

Hopefully we'll be able to keep in touch with them throughout the months and give you tons of updates!

Jada is amazing <333 Best girl group ever! Their new single Breakup Song is on itunes, and their other one American Cowboy is on itunes also, so i say you buy it, because i did (:

awesome interview! good luck to all you ninjA girls!

JADA is the best!!! they have great musical talent and are so diverse its amazing how their music sounds!