friends: the movie is a go!

The cast and crew of FRIENDS has made it official: There will be a movie!!! 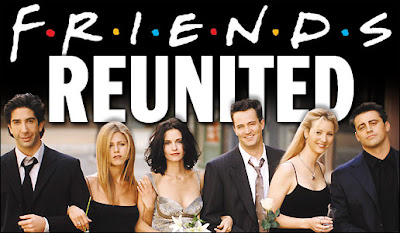 All of the cast members are said to be on board, and expected release is in 2011!

They've all said at different times that they'd be down to make the movie, but for whatever reason it never happened. Jennifer Aniston and Courteney Cox both told Ellen they give the thumbs up to the idea, if I remember correctly.

So once the script is written [by the same creators as the show! SCORE!], the crew will return to the same set once again. [Ellen took Jennifer to the set on her show last season and they took a few things, so it may look a tad different, but not much!]

There's not much else known as of now, but as more comes out, you can bet you'll find out all the info right here! AH! I'm so excited!

What do you think will happen in the movie? How will the storyline continue?! Sound off below! I'd LOVE to hear everyone's ideas!

The countdown is ON!