Woohoo! Two weeks in a row for Morons on Monday! 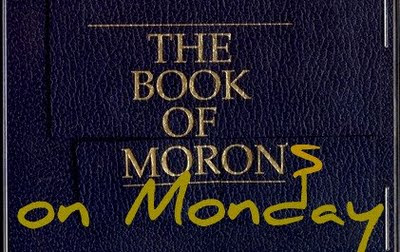 1. You're at work and you just feel like stealing something. No reason to do it besides an urge to take something. What do you take?
A) Office supplies
B) Bacon
C) Money
D) Clothes
E) Something to make the company go down the tubes

I'm switching it up! The answer is B! For BACON! In fact... The best answer would be 3 pounds of bacon which would cost a little over $11.... And probably your job, but that's totally cool.


2. If you're looking for a suspect in a burglary case, who should you hire to find the culprit?
A) Police
B) Friends
C) Random people
D) Crackheads
E) Nun

You may have thought crackheads for a while, but the correct answer is a NUN! They have no problem chasing the bad guys out of the woods to help solve a crime!


3. What's the best weapon to use when you want to be involved in a good domestic dispute? [By good I mean a serious court case involved]
A) Knife
B) Hot grits, straight from the stove
C) Hot grits plus the pan
D) Cheetos
E) Pillow

Cheetos is the obvious answer here... But why not add in some pillows, too?! A couple who fought with these items is now looking at multiple court dates after being taken into custody for the altercation!


4. What is one right that you have that is not said by the popo's or written down anywhere?
A) To show PDA
B) To be naked
C) To resist arrest
D) All of the above

No, not all of the above. [Well, maybe.. But it depends on the type of PDA... Plus that has nothing to do with this story.] According to one man, it is his right to resist arrest. It's also okay to be naked in public... On a volleyball court.


5. Where is the best place to get into an all out, co-ed brawl?
A) Fast food drive-thru
B) Your home
C) In front of a police station
D) On top of a sky scraper

If you drive a Bentley, the correct answer is A. Chic-fil-a to be exact. Why not start arguing, then fighting, then having a 2-on-1 fight in the drive-thru that leaves a woman bleeding? It makes it even better to know that it started out with guys B-slapping each other.


6. So the nuns know how to catch burglars, but who is the best person to catch a child sex offender?
A) Call the Popo, Hoe!
B) Nuns again!
C) Pet dog
D) Burglar


That's the end of the Pop Quiz! Did you pass?! Hopefully not...