Last night I was just way too drained to post everything that I have about the Real World DC, so that's what I am here to do now.

Anyways! First of all, when I went to the house, I saw them putting in a stack of carpets into the house. They were all colorful and very Real World-esque. 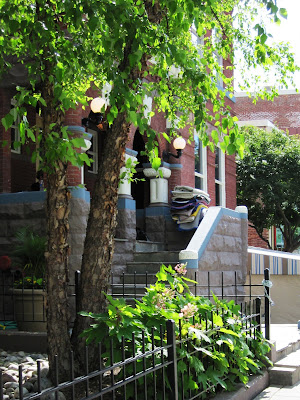 As I said before, I did see the inside downstairs thanks to the workers leaving the door open. Unfortunately, I have nothing to show you. I think it was all control rooms, though, because the hallway looked very not-for-the-camera. It'd be hard for anything fun to go down in what I saw.

When I walked away, I ran into a few of the right people. This is what I found out:
There are some other things I have learned, but either I shouldn't share yet, or I don't have it all confirmed. The above is the truth, the whole truth, and nothing but the truth. [As far as I can tell.]

The rumor still stands on the roommates moving in TOMORROW, so I will be down there in the morning to scope out the scene! Get pumped, people! I know I am!

I am so glad that I came across your blog. I have the exact same feelings about finding the Real World people while they are in DC. I walk or drive by the house daily and am sooo excited. I will be checking your site often!

Elizabethany - just found your blog. absolutely hilarious. i am also an unemployed recent college graduate who came home to dc and am obsessed with all things realworld - dc. let me know if you need a partner in crime to get into the house...i've already been to the house and taken photos outside of it. glad to see i'm not the only stalker!!
enjoy the beauitful day -
xxbecca
sodamnlucky.wordpress.com