I sat down to start writing my Costa Rica blog when I realized there was one part of the trip that absolutely deserves its own post... and also deserves the first post. Our trip to a "monkey house."

There was really one main reason we wanted to go to Costa Rica- in all of the pictures I've seen, there have been monkeys running around like squirrels. When I did more research, I realized that's an internet thing and not necessarily a real thing you can expect. After even more research, I really couldn't decide where to go to make sure I was able to touch a monkey.

We decided to talk to one of those people who try to make you spend way too much for some excursion at a hotel and said to cut the BS- all we care about are some monkeys. He told us to meet a cab driver who would take us to a place five minutes away... the "monkey house."

This guy, Chino, took us through a neighborhood while we all thought we were definitely getting scammed and probably doomed, then ended up in someone's yard who had dozens of monkeys running around. It was literally someone's house who grew fruit that the monkeys loved. Nothing official, nothing you can find on the Internet.

Chino grabbed us some bananas, told us to stand by the tree holding them, and BAM, just like that- monkeys were running up to us, on us, grabbing the bananas, and being much more friendly than even I could imagine. If you know one important thing about me, it's that only two things can make me smile on a rough day: doing gymnastics, and watching monkey videos. I was in Heaven.

Unfortunately, there's an unhappy but hilarious way this story ends, my friends.

We were warned from the beginning to stay away from the "alpha" monkey. It was obvious which one he was. He watched from afar and had a bigger "beard" than the rest. If he got upset, we'd be in trouble with wild animals.

At one point, there were four monkeys on my man. Two of them started fighting each other, and Alpha was not pumped about that. He must have ran from 50 yards away to attack his leg, start screaming very loudly, then run back. It was so quick none of us really knew what had happened, but he had a scratch on his leg and a really small puncture. Chino and his friend did some of their Costa Rican witchcraft [pouring alcohol on it], acted like it was nbd, and kept handing us bananas.

Two of them, neither one the Alpha, were inseparable from each other, and making this face:

Chino: "Oh they're smiling!"
All of us: Uhhh, you have a different idea of smiling than we do."


We took a few more pictures [because priorities], left, had some drinks, and decided to worry about whether or not it was a real issue later.

Everything has been fine for him, but the next day we heard a different story from Chino when we saw him in the lobby. Another man he took to the house had worn a hat that the monkey took off his head. When he went to steal it back, monkey was not happy. Monkey fought back. Human went to hospital for stitches. 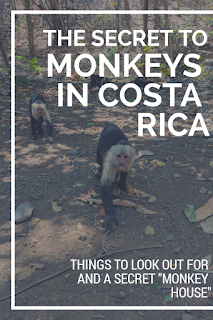 So... if you're going to be in the Puntarenas area like we were... think about how badass you feel that day. Are you too scared or are you ready to take a risk? Are you ready to fight a monkey for a hat? We need you somewhere between those things. Fighting a monkey is bad. Do not go find Chino for the Monkey House if you think a hat is important. Stay in your hotel. Go get a pina colada.. and then still stay there even when it may seem like a good idea again.

PS I made that very dramatic graphic for Pinterest purposes, of course.