watch: chiddy bang came to the studio to freestyle while eating breakfast

Remember when Chiddy Bang came to College Station and I drunkenly talked to them and had them freestyle? Yeah, neither did they until I showed them this awful, hott mess of a picture: 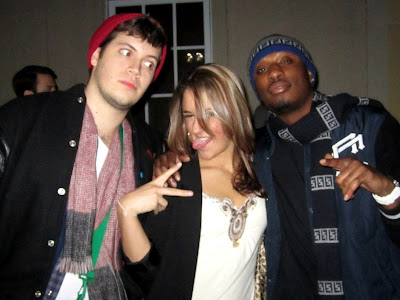 Anyway, they came in the studio and with a little more preparation, we got more creative with the challenge we had for them. Since they sent us cereal boxes to represent their upcoming album "Breakfast," we made them freestyle while eating Chiddy Bangs cereal!

They were an absolute BLAST this time. We had too much fun just hangin' around the studio before and after the filming/interviews, talking about Texas, boobs, and crazy guys showing up at other radio stations.
When they left, they told us we had been the most fun radio interview they've ever had thanks to our different challenge and because we're simply a party.