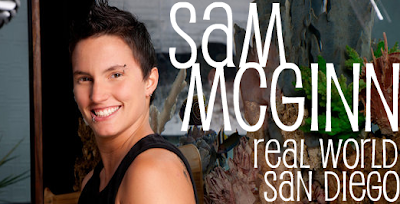 It's about that time again! Okay, so it's BEEN about that time, but there are some people I have to deal with in order to make these things happen every time, and they don't always work with me in the beginning.

ANYWAY, Sam is LOCAL here in Virginia Beach/Hampton Roads, and called into my show on my first day, so I HAD to bring her into the studio for not just a podcast, but some video interview action, too.

She's just like you see her on the show- Real, genuine, hilarious, and comfortable being her and no one else. I loved her!

In the video, we talked about all the roommates- who she'd bang, kill, and marry; what they did around the house [hints: secret drinking games and "gay monkey"....], and of course: Do her and Priscilla hook up?!
[As for the extreme green-screen, it was the best room for the job, but I didn't wanna take away from the interview by adding something to the back! So, it's there, and you won't care.]

She told me before about how some people have gone to the extreme in trying to contact her, and I want to talk about it on tonight's show, so in the podcast- she explains what happens late at night at her parents' home.
Sam also revealed her current relationship status and how the Real World fame has changed her life in Hampton Roads.

I'm sure I'll have her on again sometime! It was great to have her in studio for a change! [It made for a lot more ADD conversation, though. We were all over the place!]

Make sure you watch tonight's episode! It's going to be a tough one for Sam, and probably a lot of her fans.

PS: Subscribe to "The Real World: Beyond the Cameras" podcasts here!