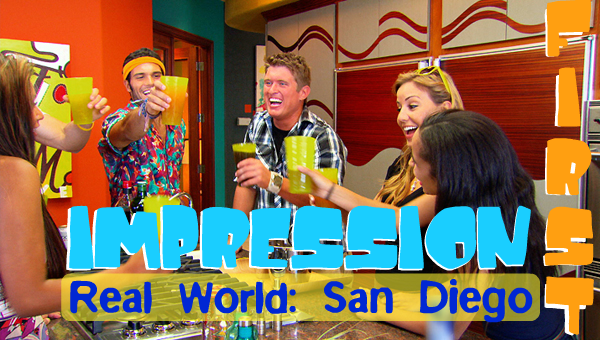 Last night was the premiere of the Real World's 26th season in San Diego, and as usual, we totally chatted it up! Doing a night radio show can't hold me down!

Because it's fun to look back on what we originally thought would happen, a summary of what went down in the chatroom is totally necessary. Mike said [in the chat] that you can't judge a show on its first episode, but that's a lie. You can judge anything within seconds, and that's what we all do. Doesn't mean it's right, but who always wants to be right? Not this girl.

My personal first impression: I think it'll be easy to like Sam, hate Zach, and envy Ashley. Those are probably the only strong vibes I've gotten so far. I could either love Frank's addition to the show, or be really annoyed quickly. We'll have to see how that plays out.

As for the season, I hope more happens than what was implied in the promos and "coming up" clips. It doesn't have me super excited to watch, but you bet I will!

Here's the general consensus of the chat last night:

I think most of us think there will certainly be some good parts... but we're not getting any extreme feelings of *OMG I CAN'T WAIT TO SEE WHAT HAPPENS WITH THAT!*

Zach, "the alpha male," has to get in one, right? But it's Frank who seems to be the serious instigator.

Sam is definitely going to bring an element that hasn't been seen on the show before. It should be pretty refreshing and entertaining. Frank will probably be more of the typical "Real World entertainment."

We all said that if Sam and Priscilla are gonna shower together, twice, in the same night, something is bound to happen in the future... right?! Plus- it seemed like Priscilla was practically asking for an experimental night. Maybe a makeout will happen, at the very least. And let's be honest... Barbie and Ken have to hook up. Again.

I'm surprised people had this response so early on, especially considering the dude barely did anything, but there's something douchey about the way he stands and looks. Hopefully this changes. I'd rather not have someone I want to punch in the face again. He's a little large for me to be doing all that.

There may not be a "forgotten one," and I normally hope there's not. The question still has to be asked, though.. and with Priscilla being a young buck, she's the most likely.

And in other, less important opinions: Their house is LE-GIT. I just want the roof. It totally trumps the Jersey Shore roof. The intro for this season is less than mediocre, though. Lame.

Agree? Disagree? WHAT YA THINK?! I wanna know your thoughts if you couldn't join us in the chat!

I'm also working on something special for the next episode. I think you're gonna like it. ;)

Here's to another fabulous season of the Real World together!