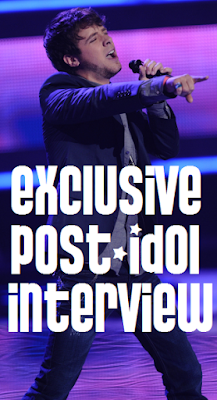 Unfortunately Tim Halperin didn't make it into the top 13 of American Idol last week, but apparently he's not too upset about it.

As I'd hope he would, he was ready to give me the first interview post-Idol this morning! [Unfortunately, I had to be second thanks to my show not being in the morning. Rude.]

Because American Idol has always been one of my favorite shows, I obviously had a million questions to ask about his experience and the people we've grown to love and hate. I got those out of the way in time to hear about his time there and what he's planning on doing now that his name has been a Twitter trending topic.

He legally couldn't tell me who he wants in the top 3 [lame!], but he did say who he thinks should have made it into the top group which totally surprised me and went against my wishes.

My opinion on Jordan Dorsey is that he's an incredibly talented singer and musician, but he was a complete d-bag during Hollywood week which probably ruined him, along with song choice last week. Tim confirmed what Seacrest always says about that notorious week in relation to Jordan.

"Hollywood Week is so cut throat and if you get into that and forget who you are, it's easy to look like a d-bag on the show."

Speaking of Seacrest, I had to know what he's really like! I love everything Seacrest does. I want to be him. When I asked Tim what he's like behind the cameras, I was so excited to hear him say he goes above and beyond his job.

We also talked about his favorite judge, what they do when they're not shooting the show, and so much more Idol-related, so give it a listen!

As you know, Idol isn't what made Tim Halperin, and it's definitely not going to end him. He can't release an album until September, but he's taking the immediate opportunity to release his next single! FO FREE!

He performed this song in order to earn a spot in the top 24, but now it's time for YOU to get it for yourself! Take a listen to his plans, hopes, etc. and his single "The Last Song."

Uh-MAY-zing song! People were texting in to the show today calling in poetry in a song and in disbelief that he wrote it. THAT'S how talented he is, guys... and I can't freakin' wait to see what the next big thing is for him.

Thanks again to Tim for being awesome at life, and everyone be sure to show him some love!

PS: I seriously couldn't be more thankful that I stumbled upon his video and tweeted about it months ago.